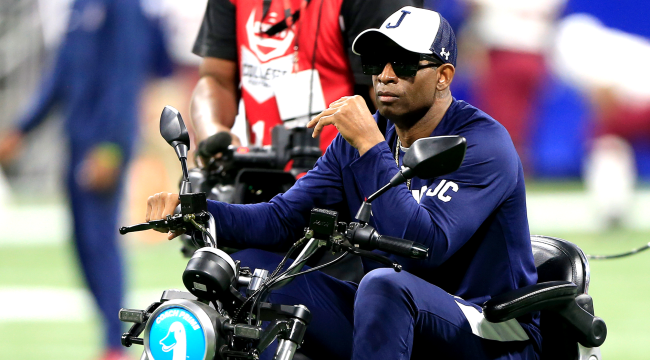 Jackson State University is being sued by Summitt Management Corporation after head coach Deion Sanders declared the team would officially be ending their participation in the Southern Heritage Classic.

The Southern Heritage Classic has been played every year since 1990 and pits Sanders’ Jackson State Tigers against the Tennessee State Tigers.

Other than in 1991 when Mississippi Valley State and in 1993 when Grambling State participated in place of Jackson State.

Recently, Deion Sanders announced that his Jackson State team would be ending its contract following the 2022 game, held annually at Memphis’ Liberty Bowl.

The team’s contract with the game runs through 2024, however.

As a result, according to FootballScoop.com, Summitt Management Corporation filed a lawsuit against Jackson State and the Southwestern Athletic Conference.

JSU had formally delivered notice to SMC Feb. 1 of this year to inform the Memphis-based company of its intention to end its participation in the rivalry contest that has, according to both parties, supplied millions in revenue through its history of pitting Jackson State against Tennessee State. JSU officials cited the SWAC as being the driving reason for its separation from the event.

“JSU’s governing athletic conference (SWAC) has entered into an agreement in which JSU’s (sic) will participate in events that conflict with the Southern Heritage Classic. Therefore, this correspondence shall serve as notice of JSU’s termination of its participation in the Southern Heritage Classic and the Agreement between the parties.” The letter was signed by Edward O. Watson, identified as General Counsel for JSU.

“Secondly, I think the fee was like over 30 years, $6 million. That’s peanuts. So by the time you take seven buses for the band, four buses for the players, couple (buses) for people, assistants, hotel accommodations, food, you’re out of that. That $180-200 grand, you’re out of that. So you didn’t make nothing. You really came up there on a blank trip. We gotta stop that foolishness. The first thing we need to take care of as HBCUs is the business aspect of everything, and that’s something we’re changing right now. We’re taking care of business.”

Summitt Management Corporation claims it has given each school’s football team and band $6 million since the game was inaugurated in 1990.

Jackson State’s annual opponent in the game, Tennessee State, called Jackson State’s decision to pull out of the game “an insensitive and irresponsible act.”

“The Memphis business community, including small Black-owned businesses, many of which are mom and pop businesses, will suffer incalculable damage,” wrote Tennessee State president Glenda Glover. “These businesses rely on contracts that are generated as a result of activities associated with the game and purchase supplies and other items in preparation for this annual event.

“What’s even more disappointing is that there was no opportunity for discussion or a courtesy call to the TSU president, director of athletics, or head coach before the decision was made to breach the contract which has three years remaining. TSU found out from a national scheduler.”

This year’s game will take place on Saturday, Sept. 10, 2022, with Jackson State participating. Should be fun.