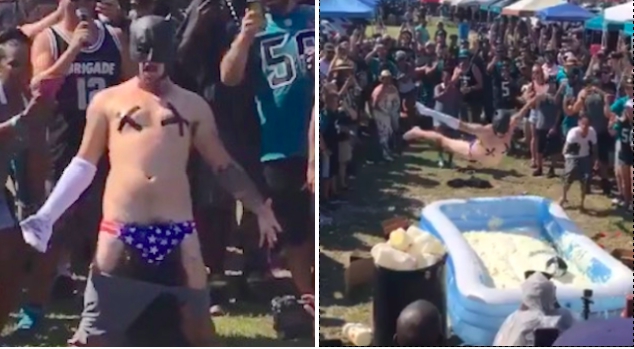 It’s been a decade since the tortured fans of Jacksonville saw their team compete in a playoff appearance. Last year, the Jags finished dead last in the AFC South, posting a 3-13 record including a 9-game losing streak that led to the termination of head coach Gus Bradley.

After an impressively dominating win against Houston in week one, the Jags fell back to earth Sunday, losing to the Titans 37-16 at home. Even with a new coach and a beefed up defense, fans are likely in for another long season, and to hedge their misery, they’ve gotten pretty creative at the tailgates. Ladies and gentlemen: I present to you: The 2017 Jacksonville Jaguars Mayonnaise Bellyflop Contest, Presented by Hellman’s.

If you'd told me at Harvard that I'd be getting paid to judge a mayonnaise belly flop contest at a Jags tailgate, I woulda said… perfect pic.twitter.com/293JE7dGkZ