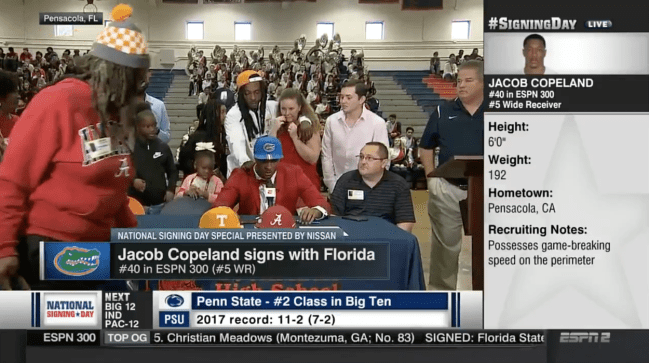 Florida’s leading receiver Jacob Copeland announced on Thursday that he will enter the transfer portal. Wherever he ends up, hopefully his mom is satisfied this time.

A redshirt junior, Copeland finished 2021 with a team-high 39 catches for 607 yards and four touchdowns. He will have two years of eligibility remaining at his next school.

Copeland’s decision comes after the school fired head coach Dan Mullen just before Thanksgiving and announced Billy Napier as his replacement last week. He is part of a fairly sizable mass exodus from the Gators program.

As one of the stars of Florida’s 2018 recruiting class, Copeland was one of the first four-star recruits to commit to Mullen. He was the No. 69 overall prospect in the nation and the No. 12 recruit among wide receivers during his recruiting cycle.

Copeland’s decision to join the Gators, came with some controversy.

Not necessarily from college football fans, but from his family.

When Copeland sat down at the table for his commitment ceremony on February 7, 2018, he had three schools in front of him: Florida, Alabama and Tennessee. He caught everybody off guard with his decision.

His mother sat to his right with a Volunteers hat and a Crimson Tide sweatshirt. Behind him, his father was decked out in all Tennessee orange.

Jacob Copeland's mother — in an Alabama sweater and Tennessee hat — just got up and left after he announced he was going to Florida pic.twitter.com/tOZHnZeamv

To Copeland’s credit, when he was put on the spot by the ESPN announcing crew, he said that he felt good about his decision. Now, a little bit less than three years later, he will have another decision to make. Will he choose Tennessee or Alabama this time?