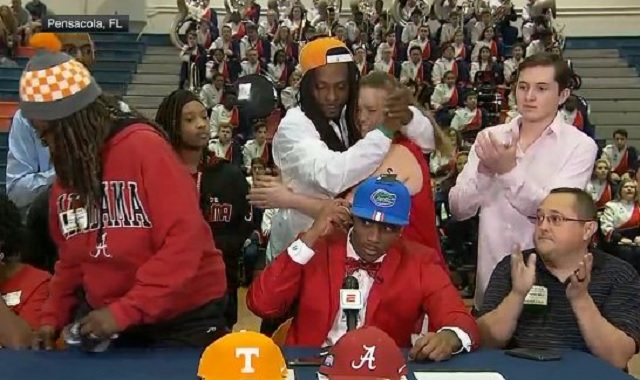 Four-star recruit from Pensacola Jacob Copeland announced today that he is signing with the Florida Gators during a ceremony that aired live on ESPN.

As soon as Copeland put on a Florida cap on his head, his mother, who was wearing Alabama and Tennessee gear, got up from the table and walked away in disgust on national TV.

When mom doesn’t approve of your school choice. pic.twitter.com/sPvKBalHDT

Throughout this entire recruiting process I never been as stressed as I am now. I cried and cried all last night about God leading me in the right directions. Now I don’t have over much as a day to decide on a school that’ll change my future after football. 😔

In the end Copeland went with his heart instead of his mother’s wishes.

“We had a lot of conversations back and forth about where I should go to school,” Copeland said while being interviewed on television during the awkward situation. “God led me and my gut led me to where my heart desired. I can’t go with my mind, I got to go with my heart.”

Eventually Copeland’s mother came to her senses and gave her son a big hug.

Jacob Copeland gets a hug from his mom after she walked off following his choice of Florida. pic.twitter.com/WMenTWLEls