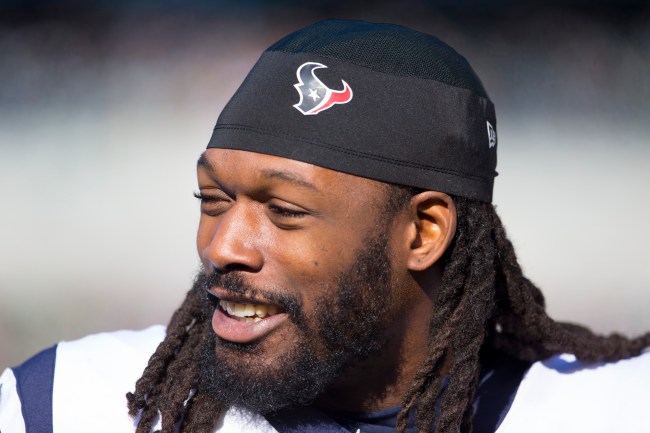 Jadeveon Clowney and the Houston Texans may be done for the 2018 season after their home playoff loss to the Indianapolis Colts this past weekend, but the former No. 1 overall pick got a bit of good news this morning when he found out that he’ll be paid an additional $1 million for a strange clause in his contract about his position. And here I thought I was lucky after finding a $10 bill in my coat pocket yesterday.

According to ESPN‘s Field Yates, Clowney was paid a bonus of $1.005 million by the Texans as part of a resolution over a dispute about which position he should have been technically listed playing under for his most recent fifth-year option. Had he been listed as a linebacker, he would have made less money than had he been listed as a defensive end, which resulted in the additional millions being given to him.

Here’s the strange explanation, per ESPN:

The option, which is built into the contracts of all players selected in the first round of the NFL draft, pays players based on their position and draft slot. (Players selected first through 10th occupy one group, while those selected 11th through 32nd are lumped into another.)

I know the holidays just past, but this seems like a nice little delayed present from the Houston Texans for Jadeveon Clowney.

After being taken No. 1 overall by the Houston Texans in the 2014 NFL Draft, Clowney has earned a total of $35.5 million so far in his NFL career, per Spotrac, so it’s not like the dude needed the additional money. But, c’mon now, who the hell isn’t going to content to get more money if they can, right? Plus, even though the Texans moved the guy around, his primary position was generally defensive end, so good on him for contesting that he should be paid as one.

Scheduled to hit free agency once this NFL season is officially over, the 25-year-old Jadeveon Clowney is probably set to cash in once again after finishing the 2019 campaign with a solid nine sacks and 16 tackles for loss. And, should the Houston Texans not be able to sign him and don’t want to see Clowney walk, they may decide to franchise tag him  — which, in 2018 for a defensive end, carried a salary of $17.1 million, per NBC Sports — although he’d be playing on a one-year deal.

Basically, life’s pretty rich for Jadeveon Clowney; and it’s only going to keep getting richer