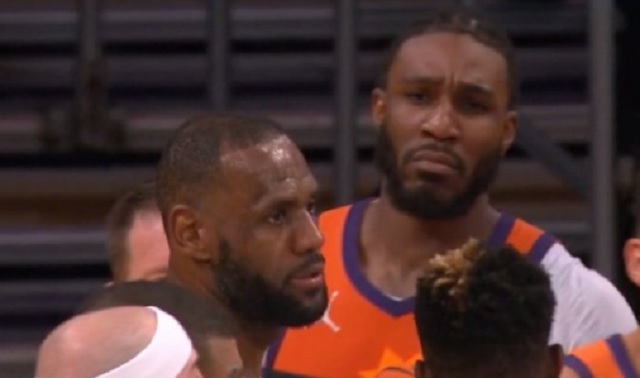 Jae Crowder has become LeBron James’ nemesis during the Suns-Lakers first round series.

During game 3, LeBron straight up told Crowder he smelled bad while running up the court.

In game 4, Crowder fouled LeBron hard which led to the Lakers superstar to curse him out and complain to the refs for not calling a flagrant foul.

As LeBron told him to “get the fuck off me”, Crowder hilariously just stared at his rival from afar.

Jae Crowder's face when LeBron asked the ref to look at a foul is a meme pic.twitter.com/fww9LLpGEx

Crowder’s reaction to LeBron complaining about the hard foul became an instant meme on Twitter.

When the waiter comes out with food but walks past your table https://t.co/lN7IkPJgOG

I make this same face when my girl mad at me https://t.co/LHn3K16dXc

This my face when I see Bron crying everytime lol https://t.co/vu1pvGxSEG

When the teacher says that the class will break into pairs, so you try to make eye contact with your friend but they already looking at somebody else….. https://t.co/MbL9ofycCT

When she come home late and won't say hi to you. https://t.co/u3U5ttANmY