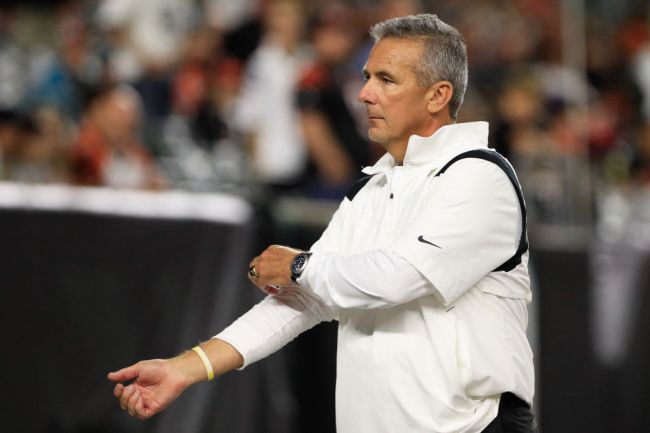 Urban Meyer’s brief time in Jacksonville might already be doomed.

Over the weekend, Meyer was filmed getting real cozy with a younger woman who is clearly not his wife at his Ohio bar.

*tapping my ear piece* hold on, im being told we now have a video from an alternate video that solves the mystery of urban’s hand! pic.twitter.com/ldpxJemucL

Meyer apologized for the incident on Monday but it appears that the Jaguars are still discussing the matter internally.

According to NFL reporter Michael Lombardi the Jaguars are having closed-door meetings regarding Meyer’s “morals clause” that would allow the team to fire him without paying out his full guaranteed salary if they feel his conduct off the field did damage to the organization’s reputation.

According to two Jacksonville sources, there are many closed-door meetings happening over the last two days in the football offices and none of them have anything to do with the Titans. Stay tuned. This might get ugly.

Two employment contract terms might become tied to this development with the Jacksonville Jaguars — "morals clause" and "for cause". https://t.co/2GztYKDbj3

That's exactly what is being discussed. https://t.co/DCO8anfRo7

It wouldn’t be entirely shocking if the Jaguars fired Meyer at this point considering how badly everything has gone for him this season.