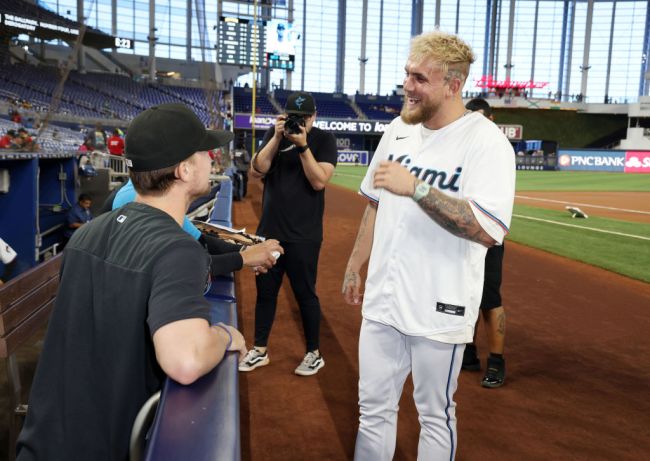 If there’s anything the last 24 hours has taught us about Jake Paul, it’s that when it comes to sports, he should probably stick to boxing.

Yesterday, Paul got to take part in batting practice on the field before the Miami Marlins took on the San Diego Padres. The video that came out of that batting practice showed Paul repeatedly whiffing at pitches, which of course led to him getting roasted online.

Today, he decided to try his hand at another sport. His next stop on his tour of Miami’s professional teams saw him make an appearance at training camp for the Miami Dolphins.

Paul got the chance to catch some passes from Miami Dolphins starting quarterback, Tua Tagovailoa, and the results were disappointing.

The videos of Paul at practice show him failing to catch a pair of passes from Tua, with one of them being a perfectly placed ball over the top to Paul in the end zone.

He certainly isn’t Tyreek Hill, but, luckily for Paul, he doesn’t need a wide receiver’s soft hands to succeed in the boxing ring.

The Miami Heat are currently in the midst of their offseason, so we won’t get to see Paul’s jump shot any time soon, but it just so happens that Inter Miami is at home this weekend, so maybe next we’ll get to see if he fares any better on a soccer field than a football field.

For now, it seems Jake Paul made the right decision by avoiding team sports when he decided he wanted to be a professional athlete.