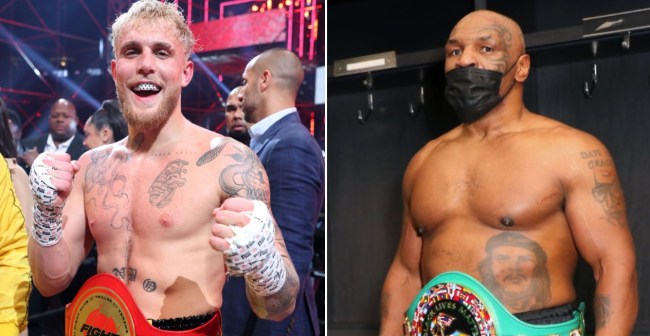 It appears that 25-year-old Jake Paul and 55-year-old Mike Tyson could be set to face each other in the boxing ring this year.

On Monday afternoon, British newspaper The Sun reported that Tyson and Paul are in advanced talks to fight each in a bout that could generate upwards of $50 million, according to a person close to the negotiations.

Tyson and Paul’s reps are thrashing out plans for a headline pay per view bout later this year.

A fight with Jake’s brother Logan had long been rumoured for Tyson, but it appears the boxing legend would prefer to face his sibling instead.

One Vegas source, who counts Tyson as a business associate, confirmed that ‘if all goes to plan’ then the fight is on.

The source said: “Mike and Jake are on board for an exhibition bout in Las Vegas.

“A verbal deal has been struck to get it on, but like all forms of sports business, now it’s all about the contracts and money split.

“Mike is looking for a certain figure to get into the ring with a profit share guarantee.

“Jake obviously has that on his mind but is keen to show the world that stepping into the ring with a man once called the baddest man on the planet, takes his boxing career to the next level.

The source added that organizers hope the bout will generate as much as £36million as a live and pay per view event.

Tyson, who had been previously rumored to fight Logan Paul, had commented on his podcast that he was willing to fight one of the Paul brothers because he felt it would make him a lot of money.

“That is the fight for the money. Those are the money-making fights, those guys got 35 million people to watch.

Jake Paul vs. Mike Tyson would definitely generate a ton of buzz if it goes down, but we’ll have to wait and see if they both make it official.