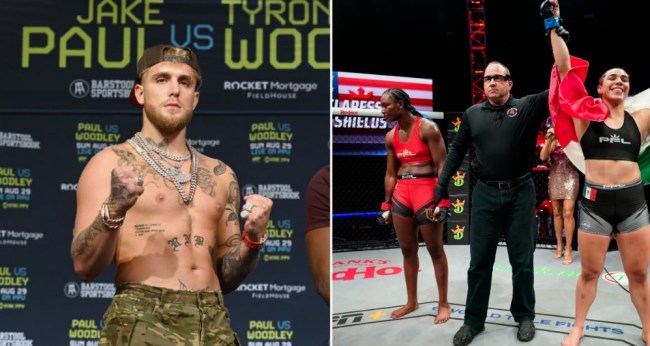 Jake Paul was waiting for the right moment to fire back at Claressa Shields.

For the past few months, Shields has taken shots at Paul and said she would refuse to fight on any of his undercard boxing matches because she’s a better boxer than him.

Earlier this week, Shields went on a rant where she claims she could “embarrass” Paul in a boxing match while using one hand.

Claressa Shields says she would "embarrass" boxing @jakepaul with one hand "I box for real, I'm not a play fighter" @Claressashields @PFLMMA #pflmmachampionships #pflmma pic.twitter.com/UFdmENvxOg

On Wednesday night, Shields suffered her first MMA loss via a split decision against Abbigail Montes at PFL.

It was the first loss of Shields' professional fighting career. pic.twitter.com/PPTLjpe40l

After the fight, Jake Paul took to Twitter to blast Shields and called her a “loser” with a “prima donna attitude.”

Congrats Abigail Montes! Someone get her a Twitter! pic.twitter.com/gRTqKLZt8A