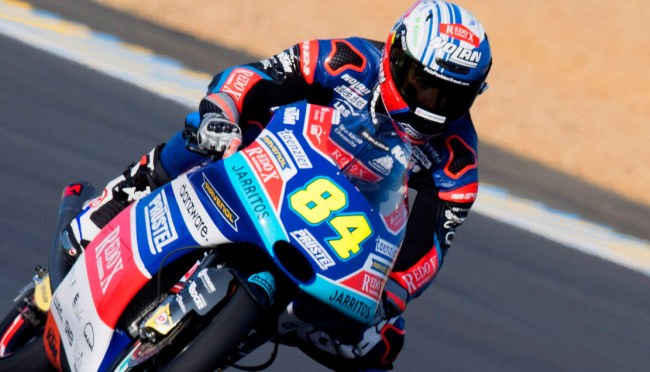 Czech Moto3 rider Jakub Kornfeil went full Evel Knievel in pulling off the most amazing save you will ever see in a MotoGP race at the French Grand Prix at Le Mans. You really have to see it to believe it.

The 26-year-old from the Czech Republic was trailing Moto3 competitor Enea Bastiannini, who was running fourth on the final lap, when Bastiannini lost control of his motorcycle, crashing directly in front of Kornfeil.

With literally nowhere to go, Kornfeil did the only thing he could do and that was ride on, up and over Bastiannini’s bike into the gravel trap, somehow continuing on his way for a sixth-place finish, less than six seconds behind the winner Albert Arenas.

Watch and marvel at the jaw-dropping save…

Television commentator Matthew Birt joked that Kornfeil should get “10 out of 10” for the landing.

“The first thing I was thinking of was to open the gas and stand up on the pegs,” Kornfeil said after the race. “The landing was so heavy, my rear suspension went down to its maximum. It even activated my leathers’ airbag. I think I won’t ever forget this race.”

Kornfeil also said that while it looked nice, the landing was a little rough.

“The last lap was really painful so (I) could not wait to stretch my body after the race,” he said.

Judging by two of the hashtags on this next set of photos (#exploded #balls), I think it’s pretty safe to say where the rough landing took its toll the most.