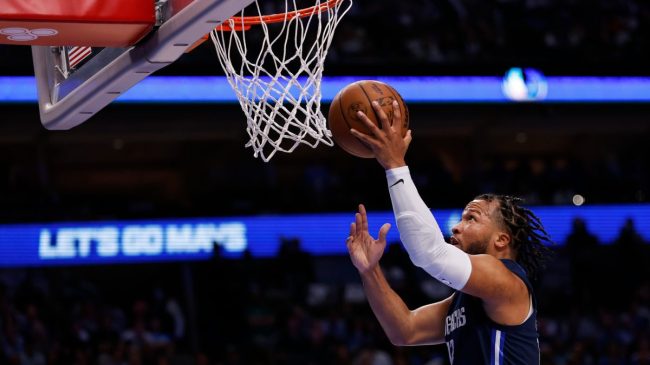 Jalen Brunson is leaving Dallas. After four seasons with the Mavericks, it’s been reported that the guard is set to join the New York Knicks for the upcoming season.

Brunson helped the Mavs reach the Western Conference Finals in 2022, where they fell in five games to eventual NBA champion Golden State.

Still, the lefty had a successful campaign. He averaged 16.3 points, 3.9 boards, and 4.8 assists per game while teaming up with Luka Doncic in the backcourt.

During the playoffs, Brunson was even more impressive, totaling nearly 22 points a night while narrowly missing an NBA Finals appearance.

Now, though, he’ll start fresh in the Big Apple. This has been a move that’s been in the works for some time. The Knicks recently cleared a ton of cap space by trading Nerlens Noel and Alec Burks to make this happen.

It was announced earlier this week that New York was looking to offer Brunson a four-year deal worth around $100M. While Brunson was certainly a big part of Dallas’s postseason run, many are skeptical that this deal moves the needle.

Are the Knicks reaching, here? Is Brunson worth $100M?

New York believes that Brunson can be even better without having to share a backcourt with ball-dominant Doncic. Their betting on him being ‘the guy’ in NYC, but some still aren’t sure.

Many think the Knicks are reaching with Brunson, and they’re trying to convince themselves that he’s worth the huge contract. Take a look at the immediate reaction around the NBA.

Who the Knicks think Jalen Brunson is: pic.twitter.com/4sCZVgBvyt

What the Knicks see when they look at Jalen Brunson: pic.twitter.com/7PtvMRPOW3

Telling my kids this was Jalen Brunson pic.twitter.com/dJK54dQjTh

Who the Knicks think Jalen Brunson is pic.twitter.com/hbKUt51Ytx

They even threw Luka in there for good measure.

Maybe Brunson will prove to be worth the money. He’ll hope to lead the Knicks on a postseason run of their own in 2023.