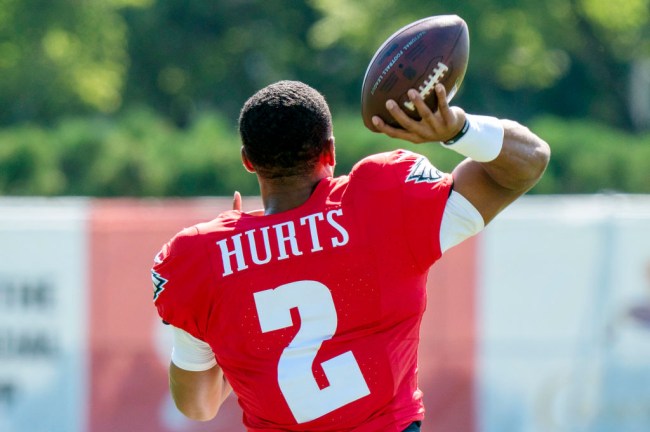 Based on what we saw from Jalen Hurts during his college days at both Alabama and Oklahoma it was easy to assume that he was a pretty good dude, and certainly a selfless one.

This recent story involving him, a backpack, and a young fan in Louisiana adds to Hurts’ good-guy resume.

In a recent story written by Chris McPherson of PhiladelphiaEagles.com, a mother in Louisiana named Nikki Godfrey asked her son Alexander a pretty straight-forward question: what kind of backpack do you want for school this year? The answer Alexander came back with wasn’t all that straight-forward, however.

Alexander said he wanted a Jalen Hurts No. 2 backpack. Seeing as how Hurts is a rookie, he hasn’t quite hit that point of his career where the NFL is making backpacks with his name and number on it so Godfrey had to get creative. She picked up a backpack and gave it a personal touch putting ‘Jalen Hurts #2’ on the front.

When everyone thinks your kid’s name is #JalenHurts bc he loves @JalenHurts and had to have a backpack with his name on it 🤦🏽‍♀️ #BoyMom pic.twitter.com/xuh1WEcPtY

Hurts took notice of the backpack and the post that Godfrey tagged him in on Twitter and he decided he needed a new backpack as well. Hurts tweeted out a photo this week of his backpack with Alexander’s name on the front of it.

That’s Lit, Alexander !! I had to get me a backpack with YOUR name on it too haha 😬💪🏽! #TWINS @nikkgphd https://t.co/5wIlTX7m2u pic.twitter.com/bZnu4cPfJM

“I’ve got a lot of love for this kid already. I’ve had my fair share of things that I’ve had to overcome,” Hurts said. “For a 6-year-old little boy to kind of realize that shows his maturity. For me, I just want to set the right example for all people watching. I guess Alexander the Great gets it.”

See, social media can be used for good, believe it or not.

I imagine ‘Alexander the Great’ had quite the day at school telling all his buddies that Hurts is walking around camp with a backpack on with his name on it.