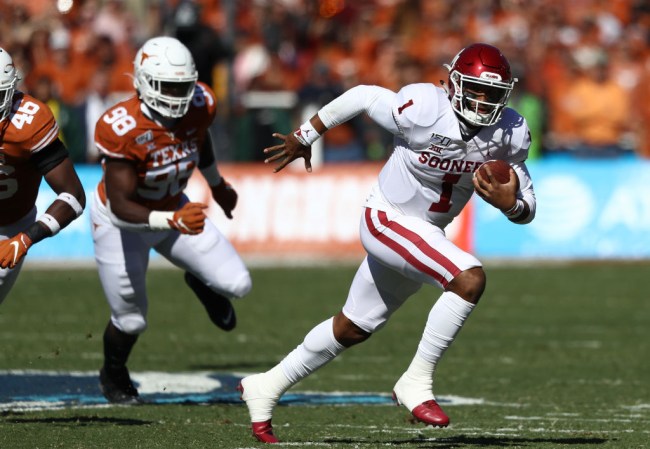 Jalen Hurts is without a doubt a Heisman Trophy candidate at this point during the college football season and the play he just pulled off against Texas will be played over-and-over again if he’s invited to New York at the end of the season.

As he’s playing in his first Red River Shootout against Texas, the Longhorns looked to have had a sure-thing sack during the third quarter but Hurts decided to go behind the back with the football to avoid it. He then proceeded to complete the pass downfield.

Jalen Hurts wrapped the football BEHIND HIS BACK to keep the play alive.pic.twitter.com/qr5EdYpppj

That’s definitely not a move you see from a quarterback too often while under pressure. It simply shows just how big of a baller Hurts is. If you got it, you got it and I think it just comes to a guy like Hurts who is 31-2 as a starter.

Following the crazy sequence, Oklahoma turned it over on downs on a short 4th and 1 but currently leads Texas 27-17 early in the fourth quarter. Hurts has three touchdowns and one interception on the day thus far.