Jalen Hurts Gives An Extremely Thought Out, Complex Answer When Asked How He’s Gone 5-0 In Games Played In Atlanta 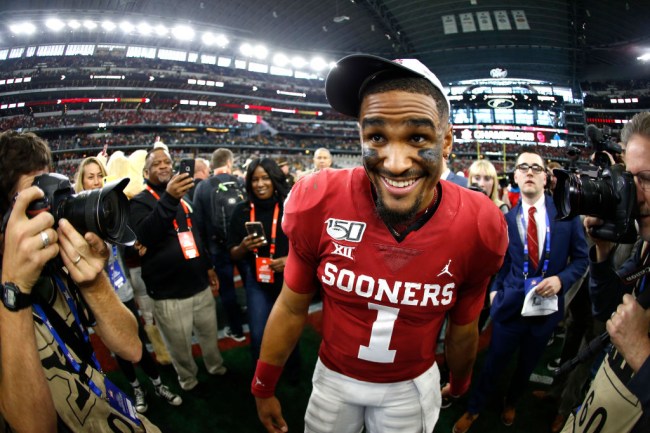 While Oklahoma enters Saturday’s Peach Bowl in Atlanta as 13.5 point underdogs to LSU, Sooners quarterback Jalen Hurts has history on his side.

When it comes to games played in Atlanta, Hurts is a perfect 5-0. All five of those wins came when he was with Alabama, but nevertheless, it’s safe to say he’s more than familiar in not only playing in ATL, but also winning in ATL.

The Heisman Trophy finalist was asked about returning to Atlanta and whether or not he had a grin on his face after finding out the Sooners would be playing in such a familiar spot and Hurts simply replied back with an emphatic ‘no.’

Related: College Football Playoff Semifinals Picks Against The Spread: Taking One Favorite And One Underdog

It was pretty clear that he didn’t want to discuss his past history in Atlanta, even though it’s all positive because the media then asked him how he’s posted the perfect 5-0 mark and he hit them with a ‘We won the games. That’s how I explain it.’

Just an all-time, thought out answer from Hurts.

You can’t blame him for the short answers here. While some may argue he was being rude with the media, what he did in the past with Alabama in Atlanta has absolutely nothing to do with him and his Sooners playing in the same city on Saturday.

Those Alabama teams that went 5-0 in Atlanta when Hurts was under center were special, which is exactly what his Oklahoma team is going to have to be to improve his record to 6-0.

LSU and Oklahoma will kick off from the Georgia Dome at 4:00 PM EST on Saturday afternoon on ESPN.