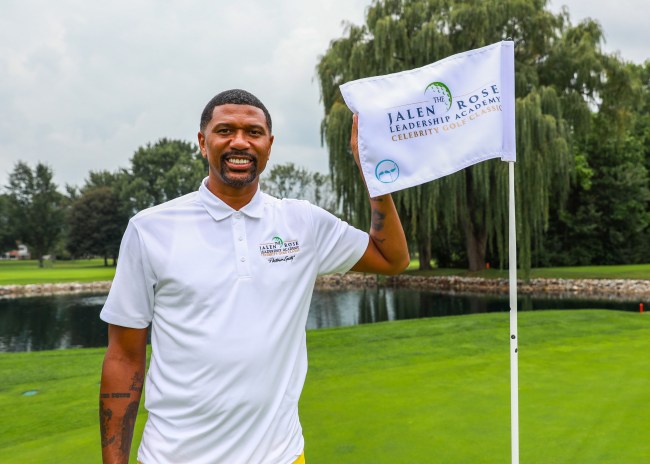 It’s the time of year when fantasy football is in the air, with people talking crap in preparation for the upcoming NFL season, bragging about how they’ll either defend or compete for this year’s championship. And, while we all wonder which NFL player is worthy enough to be taken No. 1 overall in your fantasy league draft, it’s fun to build anticipation by hearing stories about some of the high-stakes that other people have when it comes to their own league.

One of those stories happens to involve Jalen Rose and some big-name NBA superstars.

Rose, a former college standout, NBA player and current ESPN analyst, seems to take fantasy football really seriously. That’s because, while appearing on Get Up the other day as part of the network’s fantasy football marathon, Jalen talked about the intensity of an exclusive league that has a $10,000 buy-in, and has included the likes of guys like LeBron James, Draymond Green and Kevin Durant, among others.

The league, which, according to Rose, has been going on for about seven years now, sounds like it’s competitive AF, which, possibly, seemed to be too much for Durant, because the one-time NBA MVP actually left it a few years ago because he “got upset.”

“Initially, KD was in our league,” Rose said. “He got upset and left the league. LeBron was initially teammates with Randy. They came in last two years ago. He left, Randy stayed.”

Adding to the intensity this year? The fact that Jalen Rose admitted that he’s got the No. 1 overall pick, which is sure to stir up lots of shit-talking among he and the other members of the league. Let the games begin.

You can see the full segment with Jalen Rose from Get Up below, where the former baller goes into a few details about his league.

The fact that it’s a $10,000 buy-in is just insanity. Wonder what the payouts are for the winner, second place and all that, and how many people are actually in the league. Even without knowing the full details of Jalen Rose’s star-studded fantasy league, it sounds as if it’s definitely more high roller than anything you or I have (and will) ever be a part of.