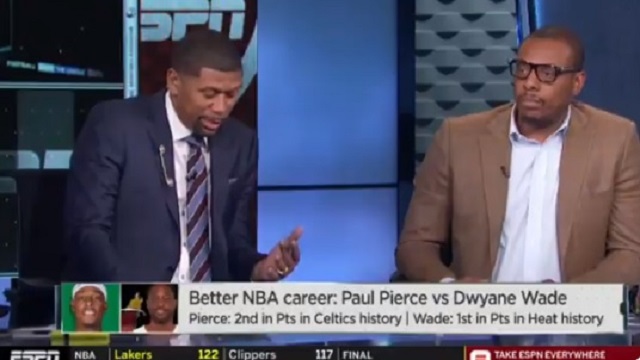 Former Celtics forward Paul Pierce is either delusional or he’s attempting to make a career for himself as a hot take artist.

During a segment last night on NBA On ESPN Pierce proclaimed that he was a better player during his career than Dwyane Wade.

Paul Pierce says he was a better player than Dwyane Wade, would have won 5-6 championsips "easy" if he played with Shaq/ LeBron pic.twitter.com/JwvS0tHpy8


Michelle Beadle: Who is the better player you or Dwyane Wade?

Pierce went on to get immediately ridiculed by NBA Twitter over his hot take.

If Dwyane Wade came back next season, played all 82 games and scored zero points in every one, he'd still have a higher career scoring average than Paul Pierce.

Paul Pierce really said with a straight face his career was better than D Wade pic.twitter.com/cnf5iPuMHz

Last thing on Paul Pierce: Was he ever considered a Top Five player during any season of his career?

Pierce would later double down on his dumb take only to get hit by a dose of reality from Jalen Rose who started spitting facts in Pierce’s face.

Bruh Jalen Rose straight fried Paul Pierce on live TV and hit him with the facts about why Dwyane Wade is better than him. pic.twitter.com/l0lnoSH0h7

All-NBA eight times to your four.

He’s made NBA All-Defensive Team three times to your zero.

He has three rings, you have one ring.

Paul Pierce knew about halfway through this Jalen Rose fact check that he maybe went too far. https://t.co/gA409EfySG