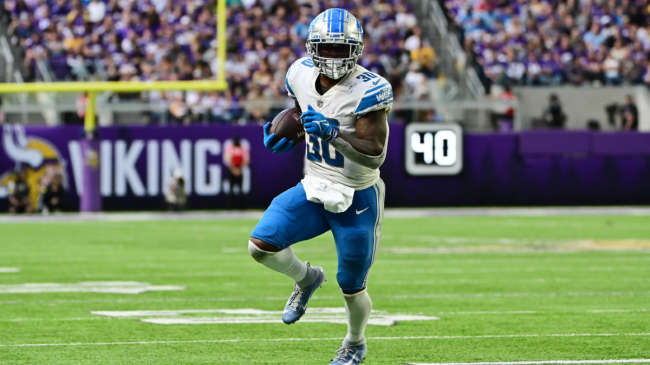 Detroit running back Jamaal Williams was called for an unsportsmanlike conduct penalty in the Lions’ 28-24 loss to the Vikings. The rusher celebrated his third-quarter touchdown a little too much after reaching the endzone.

Key and Peele told us, two pumps are fine but anything more will land the flag.

But Williams doesn’t think he did anything wrong on that touchdown celebration on Sunday. Here’s what he had to say after the game.

“I’ve been doing this forever, so now, my stuff isn’t correlating? Nothing against them, but that’s mine. My hips. It’s not even thrusting. It’s more like a wave… That’s how I should get away with it. I’ve been getting away with it for all these years, but now they want to bust me for it. I was pissed. I was sad and disappointed in myself that I gave the team a penalty… It really, like, stepped my mood a little bit.”

Williams’ touchdown was his second of the day, and it put the Lions up 24-14 in the second half. Unfortunately, some questionable decision making from head coach Dan Campbell led to a 28-24 defeat.

Detroit fell to 1-2 on the season, missing out on a great opportunity to move to the top of the division standings. They’ll look to rebound next weekend against the Seahawks.

Jamaal Williams might leave this celebration in the past in hopes of avoiding another penalty.