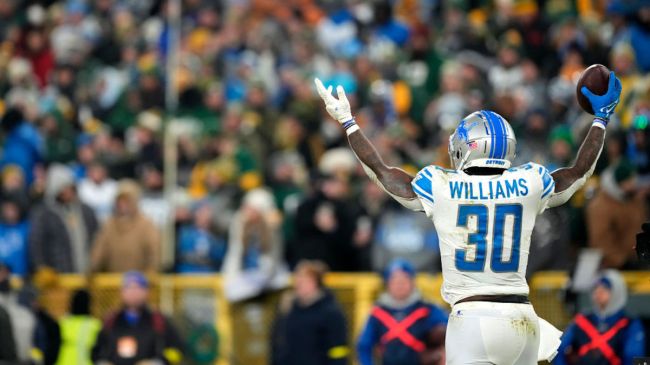 Do you know who had an excellent night last night? Detroit Lions running back Jamaal Williams, that’s who.

While his team might have missed the playoffs, they were able to upset the Packers on Sunday night and spoil their season. During the game, Williams — a former Packer who had 16 carries for 72 yards and two touchdowns — also scored his 17th rushing touchdown of the season, which broke Barry Sanders’ previous franchise record.

In addition to his on-the-field accomplishments, though, Williams also won the hearts of NFL fans across the country with his genuine and quirky personality in recent days.

Earlier this week, the 27-year-old running back went viral for saying he “doesn’t watch TV” and just wants to “go home and play Pokemon.” He also made sure to correct the reporter who pronounced the franchise as “Pokeman.”

Then, in the first quarter of Sunday night’s game, he once again went viral for his intro, which saw him say he was the “Leader of the Hidden Village of the Dead”, which is apparently a reference to the Naruto anime:

Williams wasn’t done there, though, as his postgame interview also blew up as he tearfully paid tribute to his late great-grandfather before ultimately pulling himself together to demand some respect for the Lions and to close with the incredible line of “Don’t let these tears fool you, it’s all DAWG around this mug.”

how do you not love Jamaal Williams pic.twitter.com/wHduIF5sxP

If you’ve been paying attention to Williams all season, though, you’ve likely already known about his infectiously authentic personality. Now that he’s an established and legitimate fantasy football asset, though, hopefully, Williams’ profile will continue to grow and he’ll get the spotlight that his personality clearly deserves. He’s certainly my new favorite player in the league.

Jamal Williams mic’d up is just the best 🔥 (via @Lions) pic.twitter.com/m1KJuqpEDV