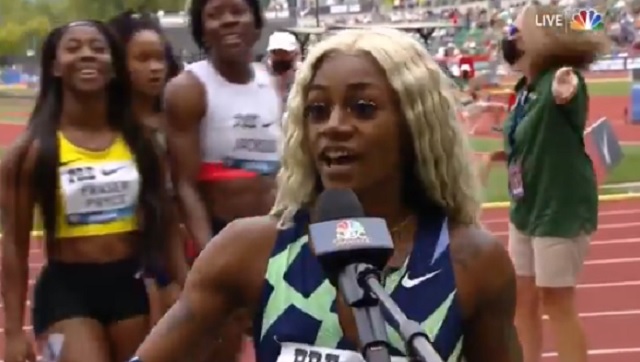 Jamaican sprinter Shelly-Ann Fraser-Pryce found herself in a viral moment after he race against Sha’Carri Richardson.

On Saturday afternoon, Fraser-Pryce got second place behind teammate Elaine Thompson-Herah as Richardson finished in last place in the women’s 100m at the Prefontaine Classic.

After the race, Richardson spoke to the media and said the month off following her suspension for marijuana slowed her down. Richardson vowed to come back and stronger and fired back at all the haters laughing at her.

Sha'carri Richardson after the race: “This is one race. I’m not done. Count me out if you want to … Talk all the shit you want to! You know what I can do!" pic.twitter.com/xlmJzpDd2D

While Richardson was giving her impassioned speech on camera Fraser-Pryce could be seen walking behind her with a smile on her face.

Shelly-Ann Fraser-Pryce was later asked about Richardson and this was her answer.

Here’s a snippet of Shelly-Ann Fraser-Pryce after the women’s 100m.

When someone asked what she thought about Sha’Carri Richardson being that far back, she said she wasn’t watching Sha’Carri. Didn’t expect anything other than Jamaica 1-2-3 🇯🇲 🇯🇲 🇯🇲 #PreClassic pic.twitter.com/em7IRn4NWV