Jamal Murray Being Called For An Offensive Foul After Putting D.J. Wilson On A Poster Is The Worst Thing You’ll See On A Basketball Court This Season 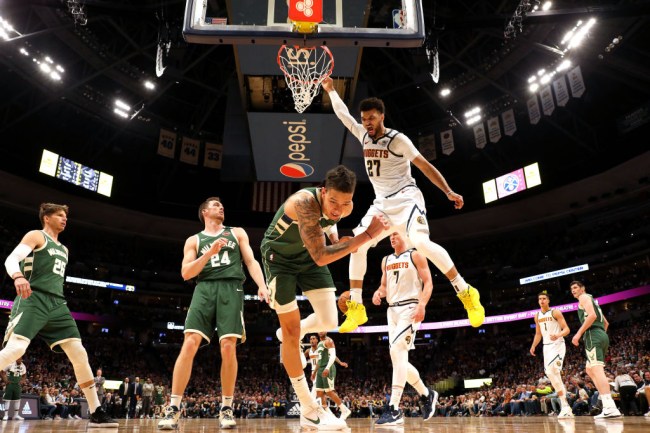 The Denver guard decided to go to the rim with authority and didn’t give a damn that Milwaukee’s D.J. Wilson was in his way. What made the dunk even that much more impressive is that Murray is 6-foot-4 while Wilson is 6-foot-10. Murray showed off his hops and dunking skills in a major, major way.

There’s no denying that this is one of the dunks of the year, but it was waved off because Murray was – for some reason – called for an offensive foul on the play. Wilson definitely wasn’t set to take a charge, instead, officials called it an offensive foul for a possible elbow.

In the slow-motion replay in the video, you can see Murray raise his arm up a bit, but it’s not like it was any sort of purposeful contact. Wilson was in Murray’s way, so Murray basically tried to jump over the man, it’s not his fault Wilson made a bad decision.

Denver won, 109-95 and Murray finished the game with 21 points, but it very clearly should have been 23 points. NBA officials don’t like fun.

Murray couldn’t believe that they called an offensive foul on the play.

Jamal Murray on his dunk waved off for an offensive foul "How is that a foul?" pic.twitter.com/UqzbCZbHi0