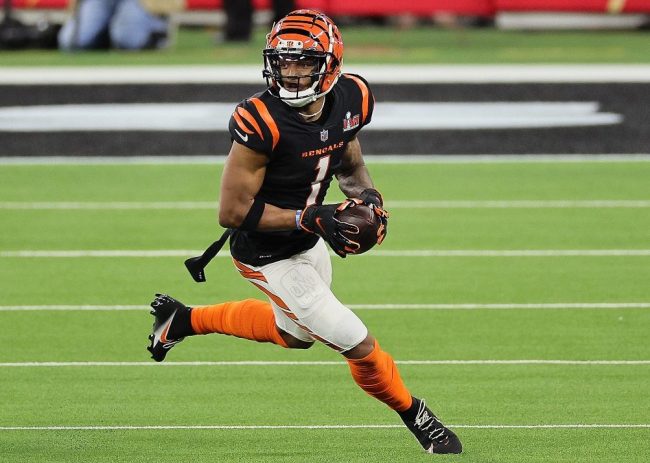 One of the hottest debates in football is discussing who deserves to be ranked as the top five best players in their position. With the wide receiver position stacked in the NFL, there tends to be a wide variety of rankings out there. However, the Cincinnati Bengals star receiver Ja’Marr Chase was asked by Brandon Marshall to name his top-five players and you’ll be a bit amazed where he ranks Justin Jefferson.

Ja’Marr Chase Ranks Justin Jefferson Ahead Of Himself

You can argue his top five list all you want. The main takeaway here is that Ja’Marr Chase names Justin Jefferson ahead of himself. This is contradicting his earlier comments, as the Bengals star has been rather vocal claiming he’s better than Jefferson.

Additionally, he also confirms that idea in the video while talking to Brandon Marshall. Then he proceeds to not put himself in the top five. It’s a weird occurrence as the Bengals’ star is all over the place in ranking himself amongst the NFL’s best.

Regardless, Cincinnati has an absolute stud in Ja’Marr Chase. He made an immediate impact in his rookie year and should improve entering year two. The Bengals are in a great position right now after years of misery. Look for him and Joe Burrow to light up the NFL as they make up one of the most electrifying duos in the league.