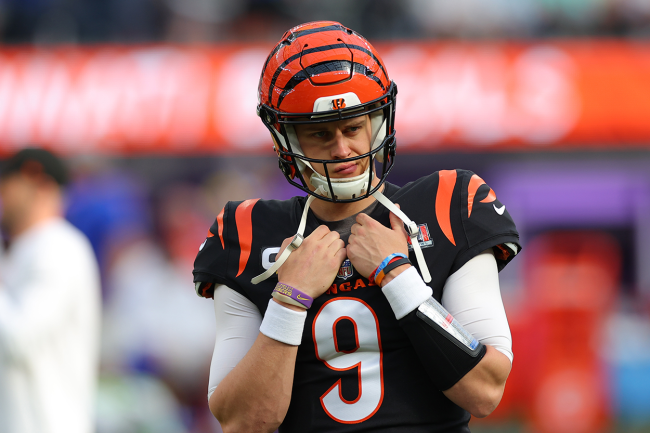 Joe Burrow is the definition of a leader. The 25-year-old quarterback is currently recovering from an appendicitis, but that didn’t stop him from being at training camp and participating in post-practice conditioning with his teammates, kind of.

After having his appendix removed right before training camp got underway, it took only a few days for Burrow to be back on the sideline. However, fresh off of surgery, he is not a full participant. Obviously.

Burrow has spent the last week on the sidelines, driving around on a scooter and on an injury cart. On Thursday, it was the latter.

Although he has every reason to sit out, stay home and rest up, Burrow is there. And he is taking every opportunity to get involved.

Throughout the third-to-last day of the second week of camp, Burrow made sure to keep his teammates — and the referees — hydrated. The temperatures are not cool at this time of year in Cincinnati and keeping the water intake high is crucial.

Good guy Joe Brrr was all over it. He was driving around passing out water to everybody.

Joe Burrow making sure the officials are hydrated at practice.@WCPO @Bengals pic.twitter.com/y8P8ZZDEiA

As the afternoon came to a close, it was time to put in that extra work that proves valuable at the end of the season. What you do in August is for when you need it in February.

Unable to participate in the after practice conditioning, Burrow proved himself as the team’s most important leader and joined in anyway. Kind of.

If Cincinnati wants to get back to the Super Bowl in 2022/23, it will need Burrow to play like he did last year. It will also need the same camaraderie, and Burrow is making sure his teammates know he always has their back. It’s exactly what you want from your QB1.