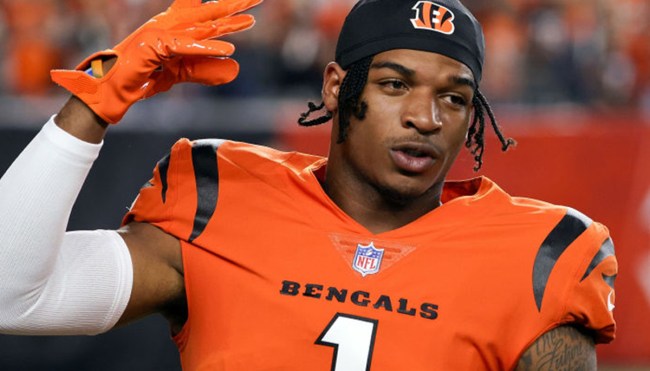 As an impressively petty person and someone with an admittedly unhealthy tendency to hold a grudge over the smallest perceived slight, I have the utmost respect for anyone who is similarly unable to let bygones be bygones and is determined to get sweet, sweet revenge on anyone who disrespects them.

Plenty of notable athletes have thrived thanks to that mentality—like Michael Jordan, who not only called out the coach who cut him from his high school basketball team’s varsity squad in his Hall of Fame speech but invited the guy who was picked over him to the ceremony to drive the point home.

That, my friends, is an act of pettiness we can all aspire to.

On Sunday, Ja’Marr Chase will take the field for the Cincinnati Bengals in the hopes of extending his first NFL campaign and punching a ticket to the Super Bowl with a victory over the Chiefs. The wide receiver has had one hell of an inaugural season and is currently the favorite to take home Offensive Rookie of the Year honors, which is especially impressive when you consider one notable college coach predicted he would peak at the position as a high schooler.

On Wednesday, sports reporter Jeremy Rauch shared what Chase told him when he asked the wideout what he used for motivation while paving his path to the NFL, as the Louisiana native revealed Les Miles told him he didn’t think he had what it took to play wide receiver in college.

Asked Ja'Marr Chase about one of his biggest motivators growing up:

"Les Miles told me I couldn’t play receiver when I was coming out of high school." #Bengals @fox19

Chase presumably had that conversation with Miles before he was fired as the head coach at LSU, and he got the chance to show him the error of his ways when he joined the Tigers in 2018 before earning All-American honors during his second and final season in Baton Rouge (where he played an instrumental role in helping them win a national championship).