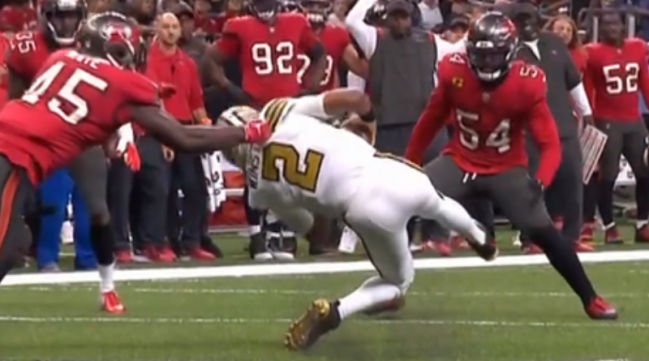 Jameis Winston left the Saints game on Sunday after appearing to suffer a serious leg injury.

During the Bucs-Saints game, Winston landed awkwardly on his leg while getting tackled by Devin Smith.

Here's what happened to Jameis Winston, was actually called horse-collar but looks to be the wrong call, Devin White didn't grab the horse-collar. pic.twitter.com/Ppb8FOGscs

Winston tried to walk to the sideline on his own but fell to the ground after putting pressure on his leg.

Winston was eventually carted to the locker room.

#Saints QB Jameis Winston carted off the field now. Winston got hurt following the Devin White horse collar tackle. After taking a few steps he fell to the ground while being assisted by the staff. Spent some time in medical tent with multiple teammates checking on him. pic.twitter.com/oIWxbOJriR