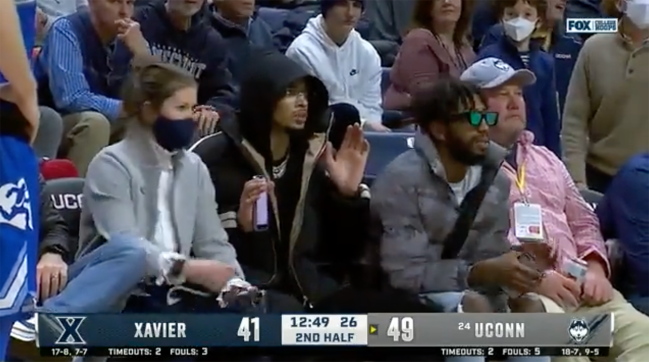 James Bouknight’s homecoming didn’t quite go as he had planned. The Hornets guard, who played his college basketball at UConn, returned to Storrs on Saturday. As the NBA All-Star weekend plays out in Cleveland, the rookie thought that he would head back to his old stomping grounds for the Huskies’ game against Xavier.

Initially, the 21-year-old began his afternoon in courtside seats.  By the end of the game, that was not the case.

During the second half, for some unknown reason, Bouknight was asked to leave. It looked like it had something to do with him standing on the court while using his phone.

Bouknight was confused as to why he was ejected but complied. He and his friend left their seats on the floor.

However, they did not leave Gampel Pavilion.

Waving to the crowd on their way out, Bouknight and his friend pump-faked their exit and turned toward the student section instead. Once the officials weren’t looking, they sneakily made their way behind the hoop and joined the undergrads in action.

At one point, Bouknight and his friend walked all the way into the upper deck and continued to fire up the crowd along the way.

Bouknight to the student section a man of the people go UConn pic.twitter.com/DEUcGKJGCl

Bouknight was a First Team All-Big East honoree a year ago and led UConn to the NCAA Tournament. He then was drafted No. 11 overall in the 2021 NBA Draft and has played an important role for Charlotte this season.

It seems as though his presence at Gampel was what the Huskies needed because they went on to beat the Musketeers by 11 and moved to 19-7 on the year.