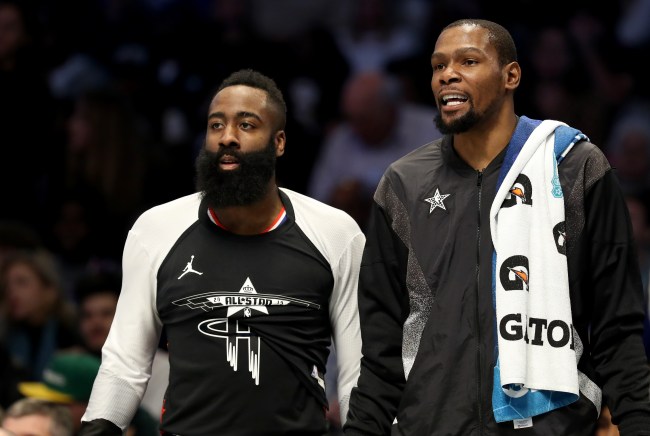 The Houston Rockets are an absolute mess and it appears that everyone on the team is ready to jump ship.

On Wednesday night it was reported that not only did Russell Westbrook request a trade because he didn’t want to play alongside James Harden anymore but other Rockets’ players were unhappy with their roles on the team.

Trouble brewing in Houston, via The Athletic:

According to ESPN’s Kendrick Perkins Harden and Westbrook were angry with the team for hiring Stephen Silas as their next head coach instead of Ty Lue.

Russell Westbrook and James Harden both wanted Ty Lue as their next head coach and when the Rockets failed to get that done that’s when communication went all out the window. From my understanding from a reliable source is that James Harden hasn’t been talking with the organization for the last two weeks.

Perkins went on to say that he believes Westbrook requested a trade out of Houston because he’s hearing the rumors about Harden wanting to join Kevin Durant and Kyrie Irving are true.

James Harden teaming up with KD and Kyrie in Brooklyn?@KendrickPerkins thinks there's something behind the rumors 👀 pic.twitter.com/Dy3wDblndT

The sources have been telling me that James Harden could possibly be joining the Brooklyn Nets with KD and Kyrie Irving or the Philadelphia 76ers.

Russell Westbrook’s problem was like if you got plans on leaving you’re not going to leave me stuck here. So Rusell Westbrook got ahead of the curve because these rumors we’re hearing about James possibly teaming up with KD and Kyrie have some truth to it.

A super team featuring James Harden, Kevin Durant, and Kyrie Irving would be unreal, but we’ll have to wait and see if there’s truth to those rumors.