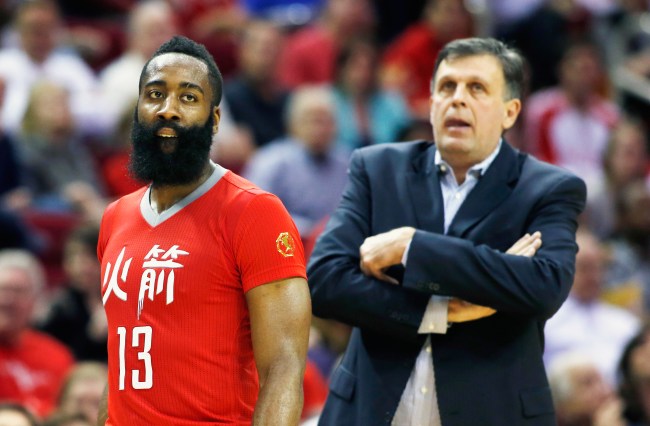 There is no love lost between James Harden and former Rockets coach Kevin McHale. McHale, who was fired 11 games into the 2015 season after a 56-win season and run to the Western Conference finals, did not mince words about Harden’s inability to lead a team while appearing as analyst on NBA TV. McHale said that it is not Harden’s “personality” to be a leader.

“James can see all the passes and do everything, but James is not a leader,” McHale said as part of a panel on NBA TV. “He tried being a leader last year, tried doing all that stuff. I think Chris Paul is going to help him just kind of get back into just being able to hoop and play and stuff like that.

“But on every team, you have to have a voice. On every team, you have to have somebody that when they say something, people listen. Like if James tells you, ‘You’ve got to play better D,’ are you going to listen to him? Like you’ve gotta be kidding me. I lived through it. Believe me, everybody in the locker room did this,” McHale said, putting his head down with his hand on his forehead. “Every time he mentioned defense, everybody would put their head down.”

“I just think Chris Paul will be good for James Harden. It will allow him to just be what he is, which is a phenomenal basketball player, not trying to lead a team. That’s just not his personality.”

McHale is likely still bitter at being abruptly axed after boasting a 193-130 record with the Rockets, the best winning percentage of any coach in team history. Regardless, Harden–who rarely engages in back-and-forth squabbles–couldn’t keep quiet.

James Harden on Kevin McHale saying he is no leader. "He's a clown."

Harden said after the Rockets’ open practice Saturday at the Toyota Center:

“He’s a clown, honestly. I did anything and everything he asked me to do. I’ve tried to lead this team every day since I stepped foot here in Houston. To go on air and just downplay my name, when honestly he’s never taught me anything to be a leader.

“… But I’ve done a great job. The organization, my coaches, you can ask any of those guys how I’ve worked extremely hard every single day to better [myself], obviously as a basketball player, but be a leader as well. To go on air and downplay my name like that, it just shows his character. I usually don’t go back and forth on social media with anybody or with interviews, but I’m going to stand up for myself, and there it is. But you just don’t go and do that. It shows what type of person he is.”

The 28-year-old former NBA MVP runner-up will likely be challenged more than he ever has in his eight-year career with the addition of Chris Paul, widely regarded as the NBA’s most voracious leaders.