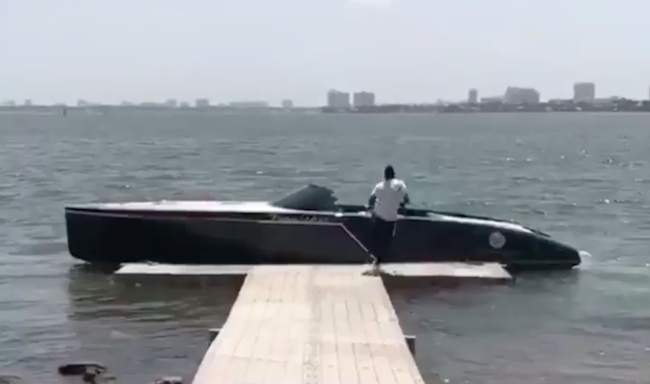 Earlier this summer, the Drive-By Dunk Challenge took the internet by storm. The concept is pretty straightforward: you grab a basketball and drive around until you come across an unsuspecting hoop that is just asking to be dunked on. Once you’ve decided on your victim, you hop out of the car, dunk (or at least try to), and hightail it out of there once the deed is done. It’s sort of like a drive-by shooting, only it’s the person doing the driving that’s most likely to get shot considering the amount of trespassing the challenge normally requires.

It’s been about a month since the meme took off, so if you want to partake at this stage, you need to do something to set yourself apart. James Harden recently decided he wanted to hop on the bandwagon, and luckily for him (and us), he had a brilliant idea for how to take things to the next level.

Harden might play in Houston, but he found himself in Miami this offseason and decided to take advantage of his surrounding environment. He grabbed a basketball and hopped into a speedboat in search of a hoop, and eventually came across a pickup game that was begging to be crashed.

He completed the challenge with an impressive dunk, but the best part of the stunt is Harden’s Grand Theft Auto-esque escape onto his waiting ride. Tommy Vercetti’s got nothing on him.