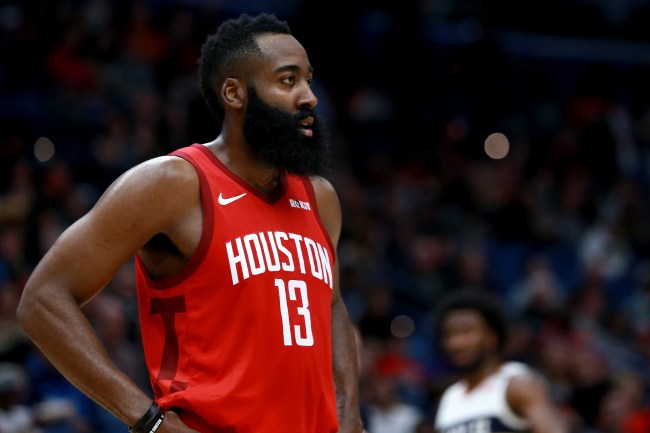 James Harden of the Houston Rockets is the reigning NBA MVP, is in the midst of a scoring 40 or more points in seven of his past 13 games, and is leading the league in scoring this season, so, in his mind, he can probably do whatever the f*ck he wants to. And, if that means showing up to a game against the Milwaukee Bucks in a get up that looks like an oversized baseball uniform that double as pajamas, so be it.

While Harden may call this look “fashion,” other people call it “ugly.” So when the Internet saw James Harden walking into the arena tonight with this very outfit on, well, they were relentless on mocking the All-Star guard. Just take a look at some of the reactions from Twitter below.

Harden looking like he just came out of the cornfields in Field of Dreams pic.twitter.com/2k4OwImJj1

This man lounging and going to shoot 40 again smh

My dude just woke up😂😂

Did he just get out of bed?

is James Harden coming from playing baseball in his sleep?

James Harden wearing pajamas or a baseball jersey from 1920? 🤔 https://t.co/64YesRhZBG

Of course, this isn’t the first time that we’ve seen quite the interesting ensemble from James Harden, as the guy has literally worn some of the strangest outfits ever into the arena before a game. Just about a month ago, the lefty came to work looking like this, so, yeah, he’s got a habit of looking somewhat ridiculous when strolling in for games. But, hey, it doesn’t seem to impact his play on the court, so if he doesn’t care, nobody else should.

Keep on doing you, James Harden, because, while your outfits may appear to be laid out for you on your bed by a blind person, you, somehow, can pull the looks off. Guess that’s called swag.