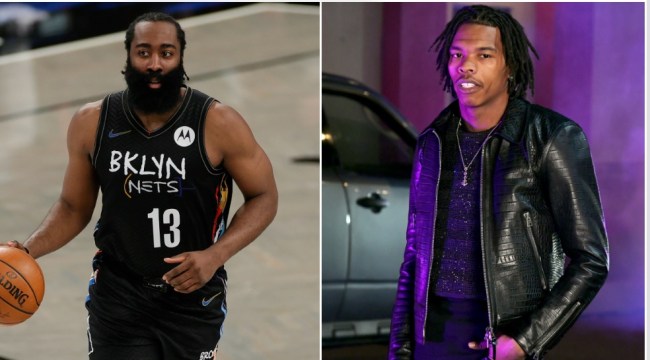 NBA star James Harden and rapper Lil Baby were apparently questioned by police in Paris a day after they were filmed in a video that went viral.

On Wednesday night a video of Harden and Lil Baby looking confused as they were met by paparazzi during fashion week in Paris made the rounds on the Internet.

James Harden and Lil Baby were caught off guard by the paparazzi 😂 pic.twitter.com/KYVLbeHOnh

Just a day after that video was filmed Harden and Lil Baby were detained by police after apparently being suspected of carrying marijuana.

Harden was frisked by the Parisian police and let got but Lil Baby was seen handcuffed inside a police van.

JUST IN: Lil Baby has reportedly been arrested for transporting narcotics in Paris‼️

Harden and several other men were swarmed by cops during an apparent search on the popular Avenue Montaigne. In one video circulating on social media, the Brooklyn Nets superstar can be heard saying he doesn’t understand what’s going on as cops begin to search him.

Baby was seated in the back of a police van and appeared to be handcuffed … local reports say he was among 3 people arrested for some sort of marijuana-related charge. The report said the vehicle the men were traveling in was pulled over and officers could smell marijuana. There were allegedly 20 grams of weed discovered.

According to @LeParisien, it appears that Parisian police stopped James, Lil Baby, and another man after smelling marijuana in their vehicle. James was not arrested during this incident. However, Baby & the other man were taken into custody by the Narcotist Transport Chief. pic.twitter.com/9S2Xwg4JKP