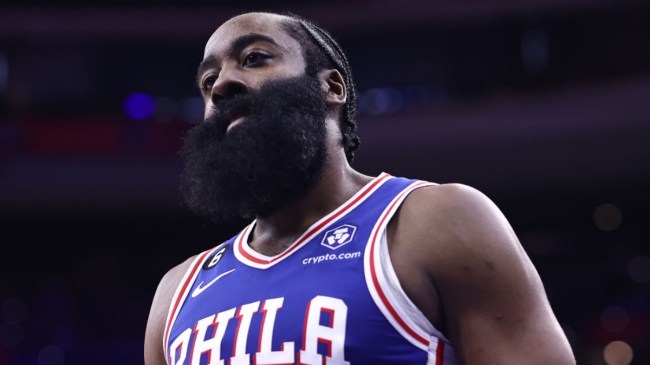 James Harden has bounced around the league a bit over the past couple of seasons.

2 seasons ago, he requested a trade from the Houston Rockets. They traded him to the Brooklyn Nets, but a year later Harden requested another trade that sent him to the Philadelphia 76ers.

That second trade didn’t sit particularly well with NBA fans, who saw it as him quitting on another team.

It seems Harden isn’t too fond of that assessment and has been wondering why Kevin Durant wasn’t also deemed a quitter after he requested a trade from the Nets during the offseason.

Harden recently spoke to Fox Sports’ Yaron Weitzman and asked if he’s still the quitter after Durant also tried to leave the Nets.

"The whole two years was a low point. I've never really had to deal with something like that."

For @FOXSports, I spoke with James Harden—and others close to him—about these low points, elimination game struggles, playing with Joel Embiid and more: https://t.co/cgzNgEStsh

I just feel like, internally, things weren’t what I expected when I was trying to get traded there. I think everybody knows that. And I knew people were going to talk and say, ‘You quit’ and all that stuff, but then the following summer, the other superstar there [Durant] wanted to leave. So it’s like: Am I still the quitter?

It feels like the answer to that question is still yes. Harden left when the team still had 2 other stars and less than a full season after Durant nearly dragged the Nets past the eventual champion Milwaukee Bucks as Harden and Kyrie dealt with injuries and Harden played poorly when available.

When Durant requested his trade, the Nets were looking at a much bleaker picture. They had just been swept out of the playoffs in the first round by the Celtics and it wasn’t really clear how much Ben Simmons would be able to improve the team. They also weren’t in position to make any big moves to improve during the offseason.

Another big difference is that Durant never actually left. Instead, he’s putting together one of the best seasons of his career, averaging 30 points and 5.5 assists per game, and has led the Nets to a 17-12 record.

Harden’s trade request also came a year after he had requested the trade from the Houston Rockets.

Unfortunately for Harden, he may never shake that label and even Kevin Durant eventually leaving the Nets won’t really help him with that.