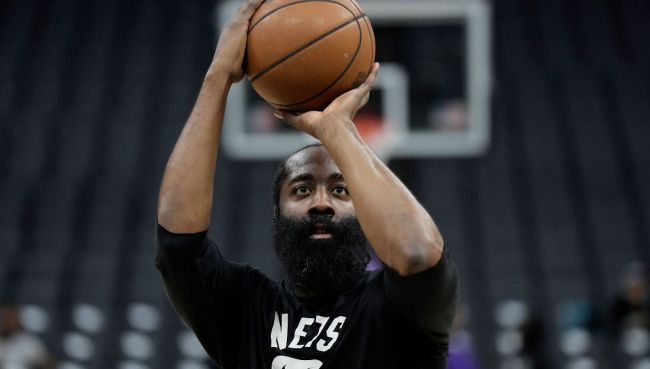 While Brooklyn Nets guard James Harden may desire a trade to the Philadelphia 76ers, he won’t formally put in the request to the organization “out of fear of the public backlash that would come with asking out of a second franchise in consecutive seasons,” according to ESPN’s Adrian Wojnarowski. In other words, Harden doesn’t want people to start to realize that perhaps James Harden is the reason that trouble seems to follow James Harden wherever he goes.

To be fair to Harden, when he forced his way to Brooklyn, he certainly wasn’t expecting Kyrie Irving to become a part-time player and full-time headache, which is certainly factoring into his decision to tuck tail and leave New York City. Still, after what he pulled in Houston to get traded to Brooklyn, doing so AGAIN would ultimately beg the question: what if Harden’s the problem?

Last week, Harden scored just four points, which simply has to be a sign that he quit on the Nets given that he had previously scored at least 10 points in hundreds upon hundreds of consecutive games.

Although Brooklyn Nets guard James Harden wants a trade to the Philadelphia 76ers, he has resisted making that formal request out of fear of the public backlash that would come with asking out of a second franchise in consecutive seasons, sources told ESPN.

Harden is hopeful that 76ers president of basketball operations Daryl Morey secures a trade for him prior to Thursday’s 3 p.m. ET NBA trade deadline, but Morey and Nets general manager Sean Marks have yet to become engaged in serious dialogue on a deal, sources said. [via ESPN]

The NBA Trade Deadline is today, Thursday, February 10, at 3 p.m., so if Harden is going to sabotage his way out of Brooklyn, it’s going to happen today.

RELATED: Series Of Videos Showing James Harden Attempting To Draw Fouls But Not Getting Any Calls Due To Rule Change Is Incredible