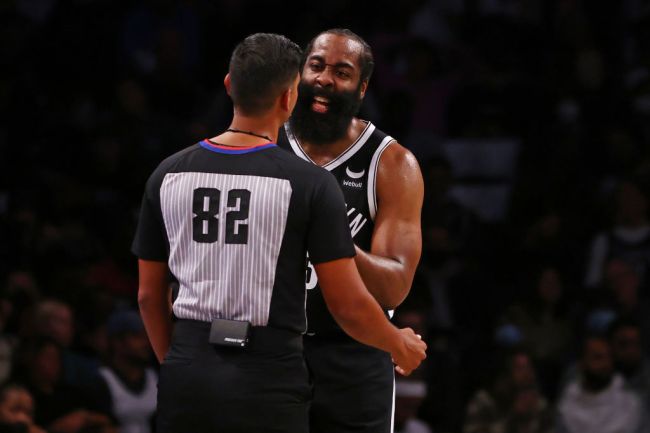 Fans are absolutely loving the NBA’s tweaking of the rules that disallows players from leaning into defenders and using non-basketball moves to draw fouls.

Unfortunately for James Harden, it appears that he has been the player most affected by the rule change. Through five games this season, Harden is only averaging three free throw attempts per game. During his MVP season, Harden was shooting about ten free throws per game.

It's the first time he's gone 5 straight games with fewer than 5 free throws since March 2011, when he looked like this: pic.twitter.com/KkeuuNX6Lh

NBA writer Nate Duncan chronicled Harden’s struggles to draw foul calls during the Nets game against the Heat on Wednesday night, and it’s fascinating to see how refs are entirely ignoring him this season.

Not this year James. Love it. pic.twitter.com/Q2yCG5wVeI

"And no call of any sort. He just loses the ball out of bounds." pic.twitter.com/OvFgZWvjVR

Harden has Bam beat, tries to draw the foul instead of making a play. Refs ain't biting. At least the 4th time tonight. pic.twitter.com/c6gtIK4mF1

Harden has already voiced his frustration with how the refs are treating him this season.

“I’m not the type to complain about it,” “I just ask every official [if] they see a foul, just call a foul. Sometimes I feel like coming into a game it’s already pre-determined, or I already have that stigma of getting foul calls but, I ask for officials to just call what they see.”

It’ll be interesting to see if Harden continues to not get calls throughout the season due to the NBA’s rule change.