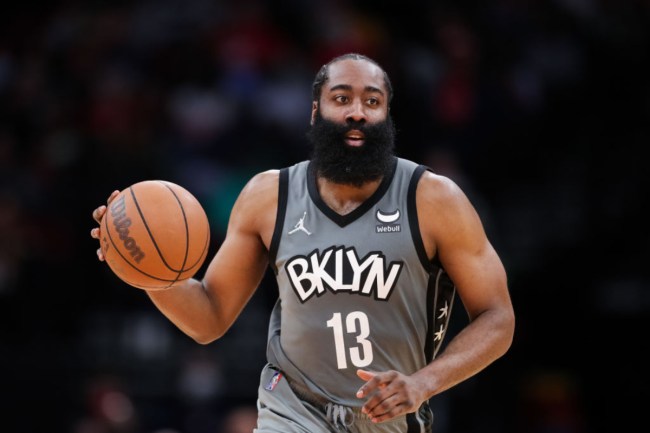 There’s nothing like some mid-January NBA rumors involving one of the league’s biggest superstars. This time around Nets guard James Harden finds himself amid the rumor mill.

According to NBA insider Marc Stein, there is some noise around the league that Harden is open to leaving Brooklyn this summer to take his talents elsewhere.

‘Noise circulating leaguewide’ seems like a blanket statement – because it is – but Stein reporting on said rumor has to mean at least a little bit of something.

Harden and the Nets have had quite an interesting season this year. The trio of Kevin Durant, Kyrie Irving, and Harden hasn’t had much time at all on the floor together given Irving’s unvaccinated status and local mandates prohibiting him from playing in home games.

The Nets have still managed to post a 27-15 record so far this season, but it’s been far from smooth sailing for Brooklyn.

Harden is signed thru the 2022-23 season with a salary of over $47 million, but does have a player option kicking in next season. Not every team in the league will be able to go after Harden with the sort of money that will be involved, but there would still be plenty of suitors for one of the premier players in the game. He could also

The NBA world had quite the reaction to the latest Harden rumor:

He's A 76er Next Yr. Everyone Knows This https://t.co/4cFYCz3WxJ

could see Harden wanting his own team again. KD owns Brooklyn. maybe Harden decides to own NYC for end of his career? would be kinda fun. why not? https://t.co/g59RlOw4eZ

If Harden pulls a "this situation is crazy, I don't think it can't be fixed" this summer after all the draft capital BKN gave up in a trade to acquire him. I will rotfl 😂😂.

(I doubt it happens he'll prob opt out and get his 💰💰) https://t.co/ITtPAdAsRE