James Harrison Shares His Thoughts On The Steelers’ Rough Start, If Pats Fans Will Boo Tom Brady, And The NFL’s Taunting Penalty 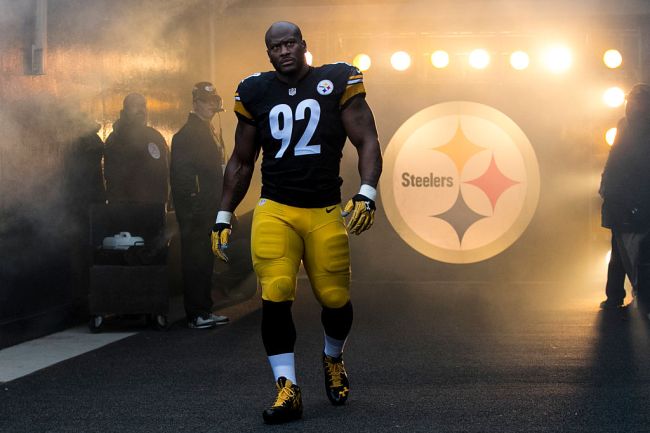 Former Steelers linebacker James Harrison knows a thing or two about playing defense and he recently teamed up with USAA to promote defensive driving tactics to help people stay safe on the road.

The Pittsburgh Steelers have lost two games in a row and have not looked good offensively but Harrison, like his former coach Mike Tomlin, doesn’t believe it’s time to hit the panic button just yet.

“You got a lot of football left. I wouldn’t say panic mode. You played three games. You still got another fourteen games left, so I wouldn’t go into panic mode just yet. They need to fix and adjust the offense, the offensive line, defense needs to get back on cue, needs to get healthy, it’s too early to panic.

Another big storyline this week is Tom Brady’s return to New England. Harrison, who played alongside Brady for one season, doesn’t think the majority of Patriots fans will boo Tom in his return to Foxborough on Sunday Night Football.

“I don’t think they’re going to boo him. that’s my personal opinion. I mean he made a decision based on what was best for him and they (Patriots) made a decision based on what was best for the organization. I don’t see them booing him but if anyone wants to boo a player for leaving an organization, the reason they’re booing them is because they’re a fan of that team, they’re not a fan of that person. Like my family would want what’s best for me that they wouldn’t care what team I play for. So, you may have some fans that will boo him because of their loyalties to the team.”

For the first three weeks of the season, fans have been non-stop complaining about the NFL’s new taunting penalty but Harrison doesn’t think it’s a big deal and feels it’s easy for players to avoid getting penalized.

“I don’t really have an issue with it. I think it’s easy to correct just turn around when you’re doing whatever you’re doing and do it towards your bench and your teammates, and I think taunting easily goes away and you don’t have to worry about you know getting a 15-yard-penalty because of your emotional celebration.”

The former NFL defensive great has found some success in the acting world recently with his role on the Starz series “Heelz.” According to Harrison, he got into acting after football as a way to conquer his fear of stage fright.

“It came out of a challenge, I have stage fright. It gave me another opportunity to conquer my fear. So I started commentating on Fox/FS1 and that led to the scripted part, and that led to me getting a team together…Getting an acting coach, just like the sport that you play and you train for, you have to a coach and train and go over dialogue, scripts and all that, and when the opportunity comes go out there and go read for it and get the part

His goals for his acting career are also quite high.

I’m trying to be the new Rock, I don’t shoot for small goals.

Harrison is currently working with the USAA on a Safe Driving Campaign to help promote the importance of using safe driving practices when out on the road.

I wanted to join forces with USAA to educate people on why it’s important to drive safe. You have to be focused on the roads, especially now that everyone’s getting back on the road so that you could keep everyone safe. Me, personally I’m a defensive driver. The reason that I’m a defensive driver is that I want to be aware so that I can anticipate what other drivers do, that way I can adjust to anything and everyone on the road.

Harrison went on to share some safe driving tips.

• Buckle Your Seat Belt
• Adjust Your Mirrors
• Mount Your Phone & Use Voice-Activated Features
• Be a DEFENSIVE Driver. Always Know What’s Happening Around You So You Can Make Necessary Adjustments