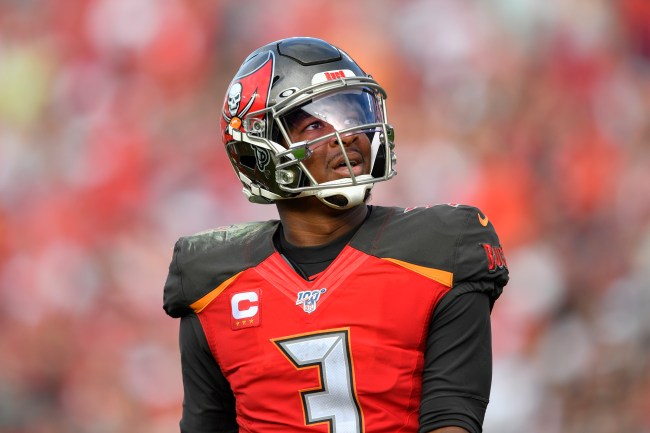 Being a Jameis Winston fan has NOT been an easy road. I went to FSU and am a lifelong ‘Noles fan. FSU‘s title run in 2013 to win the final BCS College Football National Championship was incredible.

I was also born into being a Tampa Bay Buccaneers fan by geography. The Bucs have been a HARD team to root for in the past decade but I thought things might turn around when the QB that led my alma mater to a college football national championship came to my pro team…I was kind of wrong.

It’s been a WILD ride.

Jameis led the NFL with 5,109 passing yards in 2019 and he threw for 33 touchdowns. He also led the league in interceptions by throwing the ball to the opposing team’s defense a league-leading 30 times.

If you’ve been watching Jameis for years then you’ve undoubtedly seen him squint at some point. He’s had some busted ass eyes for as long as I’ve known who he is. Always squinting to see the play call from the sidelines. Everyone’s seen it:

Thank God we don't have to watch Jameis Winston squint towards the sideline for the next 3 hours. pic.twitter.com/pVBHn3dTMh

Is it just me or does Jameis Winston squint EXTRA hard? #AllScrunchedFaceEverything

Can someone get Jameis Winston some glasses or contacts? It's not healthy to squint all the time

Flash forward to the present day and it’s being reported that Tampa Bay Buccanneers Jameis Winston has undergone LASIK surgery to fix his busted eyes. This comes during an offseason when Jameis is a free agent and the Bucs have yet to sign him to a long-term deal.

As he was throwing his 30 interceptions in 2019, Winston drew questions about whether he could see. Winston squints as a result of being nearsighted since at least his Florida State days.

“He can’t read the scoreboard but he can see the guys in front of him,” Bucs coach Bruce Arians said in the final press conference of 2019. “So he’s alright.”

Who knows whether Winston’s eyesight played a part in his penchant for throwing balls to the other team? Maybe it was merely poor decision-making.

But Winston posted a picture on Instagram of him wearing oversized, dark sunglasses. He added, “They know!!!” in response to a fan who replied asking if “Jameis get LASIK?” (via Pro Football Talk)

As a Bucs fan, I welcome this with open arms. I want him to succeed. He’s arguably a top three player in the NFL when it comes to entertainment. How fun would it be to watch him go a few games without coughing the ball up like a total dipshit?