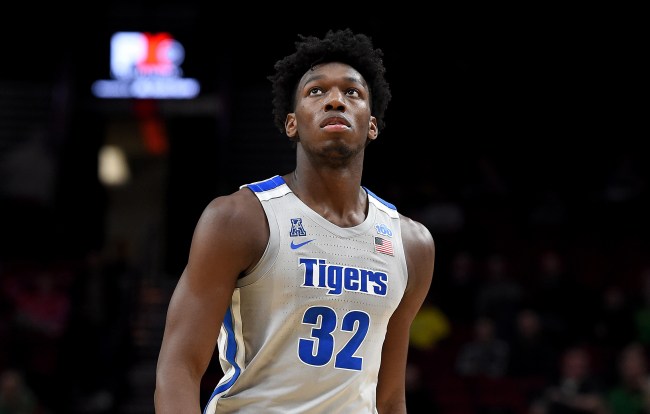 James Wiseman, the expected top pick in the 2020 NBA Draft, is officially ineligible for this college basketball season. That’s the decision that the University of Memphis went with this morning after the talented freshman dropped his lawsuit against the organization, which was originally filed last week as a way for him to keep playing. It should be noted that Memphis also announced it would apply for Wiseman’s reinstatement by the NCAA.

In the lawsuit filed by James Wiseman’s attorneys last week, a Shelby County judge issued a restraining order that allowed the top-ranked freshman in the country to play. This came after the NCAA had initially ruled him ineligible, with a statement about the issue reading: “The University of Memphis was notified that James Wiseman is likely ineligible. The university chose to play him and ultimately is responsible for ensuring its student-athletes are eligible to play.”

Following the decision to drop his lawsuit, James Wiseman tweeted his thoughts, urging people to keep the faith that the right decision will be made.

According to ESPN, the University released a statement regarding today’s decision, which included an announcement about reinstatement, as well as optimism that Wiseman will return to action at some point this season.

“In order to move the matter forward, the University has declared James ineligible and will immediately apply for his reinstatement. Pending that notification, James will be withheld from competition but will continue to practice with the team.

“The NCAA is fully aware of the unique nature and challenges in this particular case, and the University is confident that the NCAA will render a fair and equitable decision consistent with its mission.”

James Wiseman’s lawyers also released a statement regarding their client, which came prior to the announcement that Memphis would suspend the freshman. It helped explain why Wiseman was advised to drop his lawsuit.

“It has become clear to Mr. Wiseman that the lawsuit he filed last week has become an impediment to the University of Memphis in it’s [sic] efforts to reach a fair and equitable resolution with the NCAA concerning his eligibility status. Therefore, Mr. Wiseman advised his legal team that he wished to withdraw his lawsuit. There will be no further comment at this time.”

The NCAA told Memphis and James Wiseman’s attorneys that it could not reach a resolution with Memphis with a lawsuit pending. That is the reason for Wiseman taking a nonsuit in the action. The case can be re-filed if a resolution is not reached. https://t.co/ncNfNK92KB

The NCAA initially declared James Wiseman ineligible after news broke that now Memphis head coach Penny Hardaway paid $11,500 in moving expenses for the player and his family to move from Nashville to Memphis in the summer of 2017. It was prior to Hardaway becoming head coach of the program, and the school said Wiseman had no knowledge of the payment.

Following the news, people on Twitter weren’t too thrilled with the process, blaming the NCAA for, once again, trying to rip a talented player like James Wiseman from college hoops.

I’m about done with the @ncaa ruling players ineligible for this bullshit. I want to see Chase Young and James Wiseman play. Nobody gives a shit about a little money.

Wait a min….
1. #JamesWiseman was EIGHT YEARS OLD when Penny allegedly financed his move to Memphis
2. Penny wasn’t the coach of Memphis then
3. Is this retaliation by the #NCAA over losing the fight for players to be able to make money off their likeness & endorsements ? https://t.co/DkDlpTS8yQ

It’ll be interesting to see how this all shakes out, but, for now, one of the most talented college basketball players (and possible future NBA star), is left waiting to see what the NCAA rules. Bottom line: Hoops fans could be robbed from seeing this kid ever play again in college, which would be a shame.