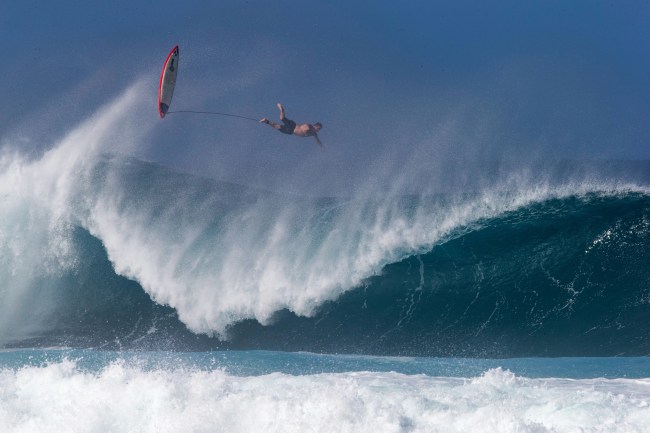 NOTE: P.s., the feature image above shows Hawaiian pro surfer Kalani Chapman wiping out at Pipeline back in 2018. I needed a crisp/professional (properly licensed) photograph for the article and this is the best I could find from Getty.

The Volcom Pipe Pro at Banzai Pipeline in Oahu, Hawaii recently took place which meant all of the eyes in the surfing world were fixed on one of the most famous waves/breaks on the planet.

Any surfing competition at Pipeline always brings in an interesting collection of surfers because Hawaii’s home to some of the best on the planet, all with access to this wave whenever it’s firing. For pro surfers, California’s just a flight away. Then you’ve got the Floridian, Brazilian, European, and South American surfers who all shred on the tour but might not have as much experience with this specific wave. There are also the real locals, the guys who live walking distance from this wave. And among that crew, we’ve got Red Bull sponsored athlete and pro surfer Jamie O’Brien.

Jamie can see Pipeline from his door. Literally. The dude lives close enough to look outside and see if the wave’s firing or not the second he wakes up in the morning.

This proximity has led to Jamie putting out some of the sickest, cleanest, and most professional footage of Pipeline firing this year. His recent clip looks like something you’d expect to see in a Hollywood-produced Surf doc it’s so good. And I’m going on record as saying this is the best Surfing footage of 2020 (so far).

Don’t stop there, my dudes. This J.O.B. clip from early December, filmed on Pipe’s first massive day of the season, is pure bliss.

It’s so easy to see why this is one of the favorite waves on the planet. The weight/power, the clean breaking crest at such big sizes, and the wild proximity to the beat. It’s amazing.