Jamison Crowder TD Catch vs. Patriots Was The Most Improbable Completion Of The Season 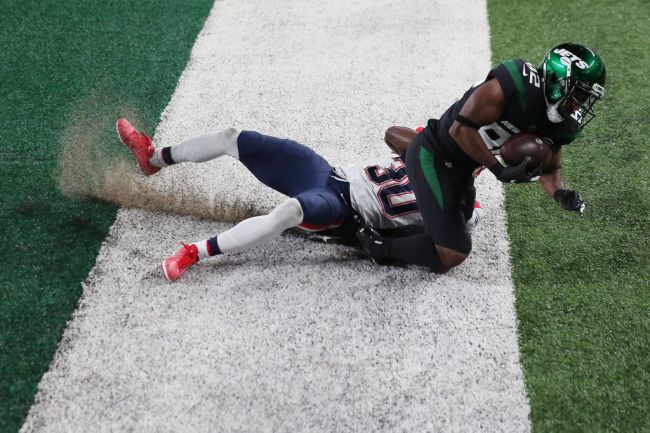 Jamison Crowder hauled in an unbelievable touchdown catch against the Patriots on Monday Night Football. While the simple eye test showed that him actually catching the pass and getting his feet down was extremely difficult, apparently it was the most improbable completion made by any player this entire NFL season.

It was an absolutely perfect pass from Flacco that only Crowder was going to get to, but the toe-drag he pulled off for the score to count was next-level.

What a throw. What a catch. #TakeFlight

According to NextGenStats, the 20-yard touchdown catch has just a 6.2% completion probability making it the most improbable touchdown since the 2017 season. Crowder had just 0.2 yards to work with when he caught the pass from Flacco.

Crowder’s catch wasn’t enough to get New York its first win of the season as New England went on to win the game 30-27, but that catch will be a highlight that will be shown over and over again.

Depending on who you ask, the Jets’ loss to the Patriots was the best of both worlds for the organization. They showed that maybe they’re not one of the worst teams in NFL history despite their 0-9 record, but they also kept their probability of landing the first-overall pick in the NFL Draft extremely high.