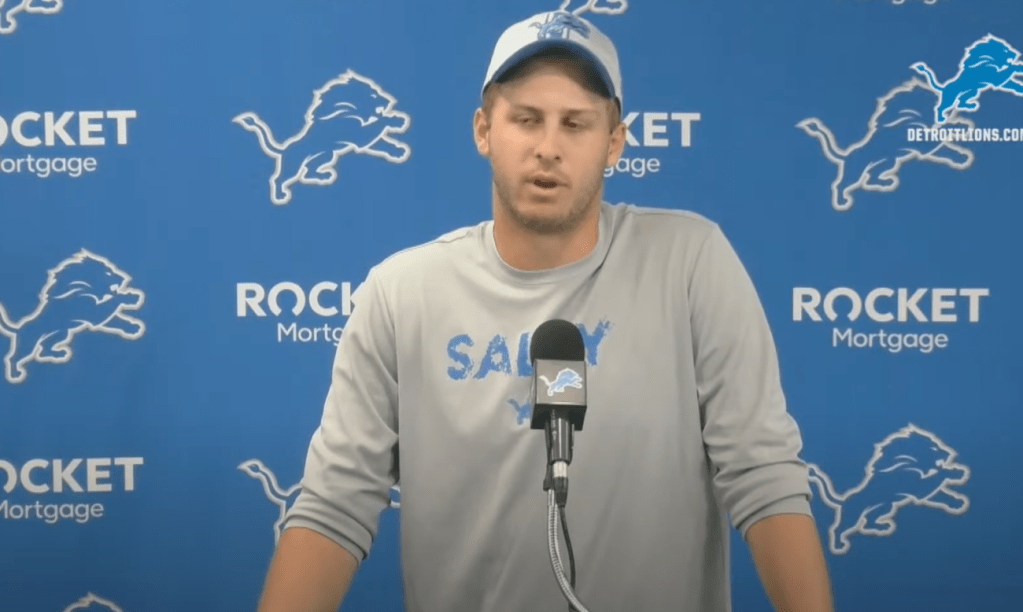 The Detroit Lions have an opportunity to make leaps and bounds towards winning in the 2022 NFL Draft thanks to their nine draft picks. They hold the #2 overall pick and the 32nd NFL Draft pick from the Los Angeles Rams, part of the swap of Matthew Stafford for Jared Goff.

It remains to be seen what the Detroit Lions will do with their #2 overall and 32nd NFL Draft picks. I’ve seen mock drafts suggest the Lions will load up on defensive talent but I’ve seen more than a few mock drafts claim Detroit will use their #2 pick on Liberty QB Malik Willis. This would be a shocker as this year’s quarterback class is the thinnest in recent NFL Draft history AND the Lions have Jared Goff.

Goff was asked about how he’d feel if the Detroit Lions drafted a quarterback and he tried to play it real cool with his answer. I definitely think his feelings on a potential QB draft pick would be dependent on when the Lions draft a QB. If they burn the #2 overall pick that’s a little different than using the 234th pick they received from the Browns. Here’s what Jared Goff had to say.

Jared Goff on how he’d feel about the Lions drafting a QB: “No, no. Whatever it is, I trust those guys. They’ve expressed a lot of confidence in me. I feel good about where I’m at, where I’m at with them, and where we’re headed. And I’m excited about it. But if anything were to happen there, no, no concern. I trust those guys upstairs.”

Jared Goff on if he’s up for mentorship: “I don’t know. I think yeah, maybe. I’ve always liked helping younger guys. I have no idea. I’ve never been in that position. But I don’t know. I’m sure I would be the same guy I am and be helpful — if I felt like it.”

Goff threw for 19 TDs and 8 interceptions in his first season with the Lions. They went 3-10-1 on the year and realistically there’s only room for improvement. But if the Lions draft Malik Willis at #2 overall, and I dont’ think they will, but if they do then there’s a reason for Goff to be concerned even if he’s trying to play it cool.

Matthew Stafford was the Lions’ QB for 12 seasons and in that span, the team only recorded 4 seasons with a winning record. Stafford then went to Los Angeles and won a Super Bowl in his first season with LA so it would stand to reason that the problem in Detroit wasn’t at quarterback.