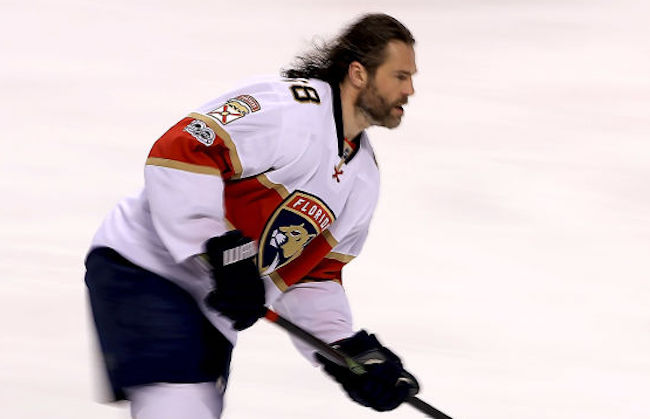 Jaromir Jagr is the definition of a machine.

His NHL career began in 1990 with the Pittsburgh Penguins, where he tore it up with fellow legend Mario Lemieux and won back-to-back Stanley Cups in his first two seasons. When everything was said and done, he played 1,733 games (good enough for third on the all-time list) with nine different teams and racked up 1,921 career points, which trails only Wayne Gretzky’s 2,857 (a ludicrous number that will never be broken).

Jagr last played in an NHL game with the Calgary Flames in 2017 but has still been an active pro player in his native Czech Republic. As one of the first superstars to come from Europe, he paved the way for tons of new talent to cross Atlantic and make an impact in the NHL. He has credited his longevity to work ethic and fitness, which he proved when he showcased how jacked he is in this Instagram post last year.

Did I mention he was 47 at the time of that picture?

One of the most interesting facts about Jagr is that he played in 65 different venues over the course of his career. 65! This was recently brought to my attention by someone on Reddit who compiled the full list and outlined just how much the NHL evolved during his 24 seasons in the league along with fun nuggets of information like: “Of the 21 teams that existed when Jagr joined the NHL, only two still played in the same venue when Jagr left (plus the Islanders…sort of).”

I highly recommend checking out the full list on Reddit but I also did a little digging to highlight some of the more interesting locations Jagr graced with his skates during his storied tenure.

Outdoor games have been a cool tradition for the NHL, paying homage to the pond hockey experience that many hockey players grew up with and exploring unique venues to host games.

In the NHL’s 5th annual Winter Classic game, Jagr and the Philadelphia Flyers took on the New York Rangers at Citizens Bank Park, home of the Philadelphia Phillies. The Rangers won 3-2 after being down two goals in the second period.

Jagr suited up with the New Jersey Devils for another outdoor game against the New York Rangers at Yankee Stadium on January 26, 2014. The Devils fell 7-3, but Jagr capped off the night with two assists.

The Penguins faced off against the Nashville Predators for the first two games of the 2000 regular season in Saitama City, Japan, just outside of Tokyo.

They split the series 1-1. At the time, Jagr was an international superstar and one of the most famous names in hockey. He even got to meet 1998’s Miss Japan, Nana Okumura. Good for him.

Extra tidbit: The Cleveland Barons were founded in 1976 but were a short-lived franchise. They merged with the Minnesota North-Stars (now the Dallas Stars) in 1978.

The San Jose Sharks spent their first two seasons (1991-1993) playing at the Cow Palace, just outside of San Francisco. The arena opened in 1941 as a venue for animal livestock expositions (hence the name). When World War II began, the Federal Government rented the arena to be used as a staging area for troops headed to the Pacific Theater and eventually used it as a huge repair garage for military vehicles and equipment.

The Cow Palace has hosted a wide array of events since then, including boxing events and even a Beatles concert. Jagr’s Penguins beat the Sharks 8-0 here in 1991, but Jagr didn’t have a single point. I think his 1,921 other points make up for it, though.

The Omni Coliseum was built in 1972 and hosted the Atlanta Hawks of the NBA from its opening until its demolition in 1997, and the Atlanta Flames of the NHL until 1980 when the team was moved to Calgary. However, Jagr’s lone appearance here was a neutral-site game in 1993 against the Boston Bruins, resulting in a 4-0 Penguins victory. Jagr assisted on three of the Penguins’ four goals.

The Montréal Forum was one of the great cathedrals of hockey. It hosted the Montréal Canadiens for 70 years until they played their final game there on March 11, 1996. The Canadiens were consistently dominant for several decades, having won 24 Stanley Cups since 1915 and producing several all-time great players such as Maurice “Rocket” Richard, Guy Lafleur, and Jacques Plante.

Jagr’s final appearance at the Forum was on January 12, 1996, with the Penguins. The Canadiens won 6-5, but Jagr had a goal and two assists to cap it off.

The Hartford Civic Center, now called the XL Center, was home to the NHL’s Hartford Whalers until they relocated as the Carolina Hurricanes in 1997 due to lackluster attendance. Although the Whalers never won the Stanley Cup, they had their fair share of success throughout their history, and have had several legends on the roster such as Gordie Howe and Ron Francis.

Francis would be traded to Pittsburgh during the 1990-91 season where he played with Jagr until 1998. They played their final game in Hartford together on January 15, 1997, beating the Whalers 3-0. Jagr had a goal and an assist, and Francis assisted on Jagr’s goal.

The Québec Nordiques played at Le Colisée de Québec from 1972 until 1995 when the team was relocated to Denver, Colorado as the Colorado Avalanche. The Nordiques were the only major professional sports team to be based in Québec City in the modern era. Just before the team relocated to Denver, they became a Stanley Cup contender with the likes of Joe Sakic and Peter Forsberg headlining their roster.

Jagr and the Penguins played in Québec for the last time on March 16, 1995, losing 3-2 but scoring a goal and an assist. Sensing a trend here yet?

The Atlanta Thrashers called Phillips Arena (now State Farm Arena) home until their relocation to Winnipeg at the end of the 2010-11 season. The Thrashers didn’t have much success, to put it nicely. They only made it into the Stanley Cup Playoffs once, during the 2006-07 season, carried by leading scorer Marian Hossa who had a 100-point regular season. This glimmer of hope in Atlanta was too good to be true, though. They got swept by the Rangers in the first round.

Jagr was playing in Russia’s Kontinental Hockey League during the Thrasher’s final NHL season, so his last game in Atlanta was actually on December 7, 2007, as captain of the New York Rangers. The Rangers lost 4-2, but I’m sure Jagr isn’t losing sleep over it.