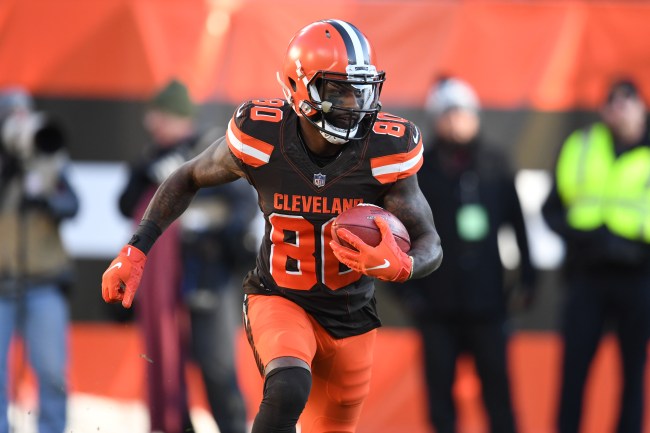 The Cleveland Browns are 5-2 and are well-positioned to contend for the playoffs but they still face many challenges especially after losing Odell Bechman Jr. to an ACL injury.

Halfway through the season we were able to sit down with Browns star wide receiver Jarvis Landry, who is participating in the USAA’s Salute to Service Sweepstakes to give military members and veterans the chance to win a virtual fan experience with an NFL player, to talk about Baker Mayfield, the Browns’ season, and the team’s reaction to losing Odell to injury.

Military NFL Fans, want to win a one on one virtual meet up with me and a high tech fan cave from @USAA – the #SaluteToService partner of the @NFL? Go to https://t.co/Nrx8ygEemq to enter and for more info! pic.twitter.com/iW2N09WMqT

On Sunday the Cleveland Browns went back and forth with the Cincinnati Bengals in a wild game that ended with a Donovan Peoples-Jones touchdown with 10 seconds left to go in the fourth quarter. Landry said he felt the game was a must-win considering the Ravens and Steelers are currently at the top of the division, and he was excited to see how his team kept fighting back for the win.

It’s the never quit mentality… to be resilient. Our mindset going into that game is that it’s a must win game, it’s a division game right? I’m just excited to see how we continued to answer the call. When they kept going, we kept going, and that was something that was really exciting to see.

Browns’ QB Baker Mayfield struggled early on against the Bengals when he went 0-5 and threw an interception but immediately bounced back and went nearly perfect for the rest of the game. Landry told us he was impressed with the way his QB stayed focused and composed even when things weren’t going well for him.

“He never folded. He continued to keep his composure. Whether we scored or had to punt, he would come to the sideline, and he was already on the iPad trying to figure out what the next calls were going to be for the next drive and that was something that I noticed this game, and we went out there and executed for him. Guys stepped up and made plays.

The big news coming out of the NFL this week is that the Browns are going to be without star wide receiver Odell Beckham Jr. for the rest of the season after he suffered a devastating ACL injury on Sunday. Despite losing OBJ, Landry is staying positive about the team’s outlook going forward.

“Guys are gonna have to step up just like they did last Sunday. David (Njoku) came back from an injury and played well, We’re gonna get Austin Hooper back here pretty soon, Nick Chubb is gonna be back pretty soon. Guys that are just going to have to step up and make plays, nobody needs to do nothing extra, just make plays, trust the coaching staff to put us in the position to make those plays and go on from there”

Landry is currently battling his own injuries. Two weeks ago he suffered a broken rib when he took a huge hit from Colts’ linebacker Zaire Franklin but the Browns’ wide receiver is making sure he’s taking care of his body so that he can go out and play on Sunday.

“I’m taking it one day at a time and doing all the small things to take care of my body and make sure that I can practice and just get back to doing recovery things so I can get right for Sunday. Just kind of not trying to look too far ahead or anything like that. Just trying to make sure to care of everything.”

Despite dealing with injuries, Landry was involved in one of the game’s biggest plays on Sunday when he threw the ball 20 yards down the field on a trick play for a completion midway through the fourth quarter.

According to Landry, the play was actually designed for Odell but head coach Kevin Stefanski thought it would be a good idea to run it with him instead when OBJ went down with an injury.

“That play that we ran this Sunday wasn’t even designed for me, that was Odell’s play and we flipped it. He was going to be throwing the ball on that play but Coach Stefanski figured that was a great play and he came to me on the sideline the drive before and he called it. We switched the formation so I could throw it from the left and it worked out.”

The Cleveland Browns are currently sitting at 5-2 which is the team’s best start since 2007 and there appears to be a sense of optimism for the first time in a long time in the team’s facility.

“It feels damn good (to have a winning record). It’s a good time for us here, as a part of the organization having the opportunity to come here three years ago and to go from where this organization was into where it is now. It’s a testament to the Cleveland Browns and the fans here in Cleveland. You just gotta keep believing and that’s what we’re doing and taking it one day and one game at a time.”

Jarvis Landry has teamed up with USAA to encourage military members and veterans to enter the USAA Salute to Service Sweepstakes at SaluteToService.com for their chance to win one of the five “Ultimate Fan Cave” grand prizes, which includes a virtual experience (Skype call, video game play session, etc.) with an NFL player.