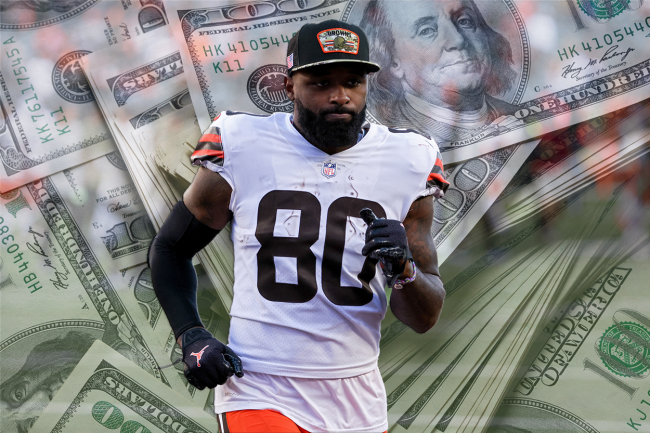 Jarvis Landry wanted out of Cleveland after the 2021 season. The team was unable to find a trade partner for the 29-year-old wide receiver, so it cut him earlier this month.

And now, after a few weeks of being a free agent, Landry has yet to find a new team that can meet his contractual expectations.

As a result, Jarvis Landry has hired a new agent to help seek his new contract.

Landry was previously represented by Damarius Bilbo of Klutch Sports. That is no longer. According to NFLPA records, Landry is now represented by Roosevelt and Jovan Barnes.

The decision to switch agents comes after Landry reportedly was seeking big money for a new contract. According to Pro Football Talk, the seven-year NFL veteran was seeking a new deal in the range of $20 million per year.

Now, with the wide receiver market exploding the way that it has during the offseason, an ask of such significance isn’t that outlandish. However, it is still a massive number and now, about two weeks into free agency, it will not be easy to find a deal at $20 million per year.

In addition, Landry has not proved himself to be worth that number. There is no denying that he would be a valuable asset to whatever team decides to bring him on, but $20 million per year is a very large ask.

What could end up happening is that Landry could get his $20 million per year contract. It just might be back-loaded to get the desired annual average.

There is also the possibility that Roosevelt and Jovan Barnes could get Landry paid like he desires. Either that, or Landry will have to settle for less.