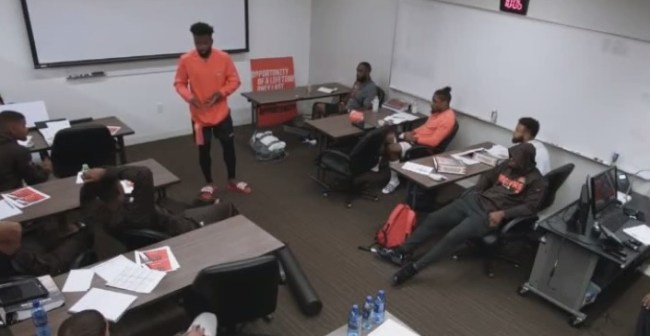 HBO’s Hard Knocks made it’s long-awaited return to the air tonight on HBO and it seems like the show has its new star. During the first episode of the series, newly signed Jarvis Landry made a huge impression when he delivered a riveting speech to wide receivers for sitting out in practice during a film room session.

This speech is either going to be great for the Browns or just great for Landry’s marketability.

Fellas, I don’t what the fuck has been going on here and I don’t know why the fuck it’s been going on here but if you’re not hurt, like if your hamstring isn’t falling off your bone, your leg ain’t broke, you should be fucking practicing.like straight up, like that shit is weakness and that shit is contagious as fuck and that shit isn’t going to be in this room, that shit has been here in the past and that’s why the past has been like it’s been. That shit is over with. If you can fucking practice, fucking practice.You ain’t gonna get no better, ain’t nobody gonna get better by being on the fucking sideline if you ain’t fucking hurt. If you’re not hurt you gotta fucking practice because you make other motherfuckers work even fucking hard, now they have more risk of being hurt because you’re being a fucking bitch.

The Internet was instantly impressed by Landry’s speech.

I bet Ray Ray will have something to say about that.

Truth. I literally put a hole in the side of my house immediately after listening to it.

Although Landry’s speech was incredible and filled with expletives, it didn’t look like anyone in that room was feeling the extra motivation. But we are talking about the Cleveland Browns after all. It’s going to take a while to flip the organization’s mentality.