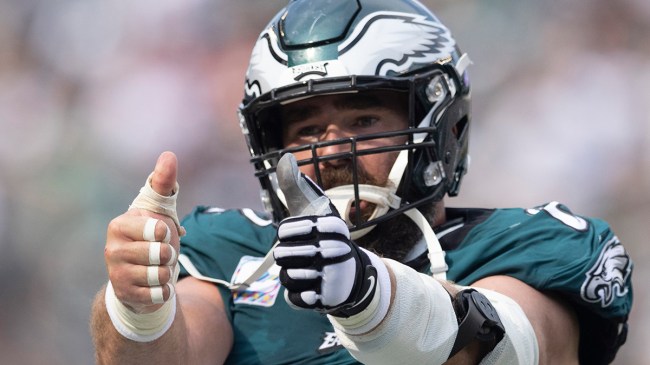 It’s been over a decade since Jason Kelce was scooped up by the Eagles with the 191st pick in the 2011 NFL Draft, and it’s safe to say he’s done pretty well for himself over the course of a career he’s spent exclusively with Philadelphia.

The center kicked things off with a bang when he was named Philly’s starting center ahead of his rookie campaign, and since then, he’s earned first-team All-Pro honors on four different occasions and been named to the Pro Bowl five times.

He was also a member of the squad that topped Tom Brady and the Patriots in Super Bowl LII, which led to one of the best victory speeches in recent memory

Kelce is also the kind of Veteran Presence you love to have in the locker room, and he highlighted exactly why he’s the sort of guy you want on your team while discussing the fairly lofty expectations surrounding the Eagles while speaking with the media ahead of their season opener against the Lions on Sunday.

Based on the current odds, Philadelphia is poised to go toe-to-toe with Dallas for NFC East supremacy. However, Kelce knows as well as anyone that preseason predictions mean absolutely nothing once the action gets underway, and he did not mince words when addressing that reality in a rant where he let more than a few f-bombs fly.

“Expectations are just that – they’re f—ing nothing.”

“When the expectations are high, you tend to let little things go.

After a win, the tape gets assessed differently. After a loss, the tape gets criticized very, very much because people are feeling it. You have to improve everything when you lose. When you win, it’s like, ‘Eh, you know, was that a bad play?’ You let it go a little bit by the wayside.

I think that when you’re expected to do well—organizationally, player-wise, team-wise, coaching-wise—all of those little things start to be like, ‘Eh, you know. We’ll get that fixed.’ Whereas when the expectation is low, it’s like ‘We’ve got to fix everything right f—king now.’ Otherwise, we’re getting fired. Otherwise, people are going to be out on the streets.

I think we’ve got enough older guys around this building—whether it’s executives or coaches or players—to understand that expectations are just that: they’re f—king nothing.

We got to go out there and play. The moment you’re comfortable in this league, somebody’s coming for you. We’ve got Mr. T in Rocky III. He’s going to be hunting us every single week—and we haven’t won f—king nothing yet.

We’re not even champions, so we better work our asses off. “

How can you not love that man?