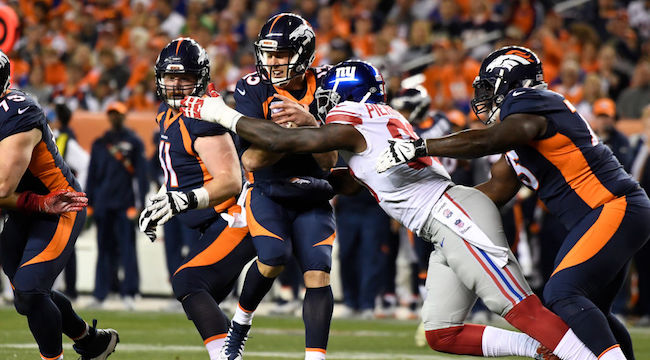 Jason Pierre-Paul recorded three sacks against the Denver Broncos on Sunday as he helped to lead the New York Giants to an improbable 23-10 victory— their first of a season that has been plagued by injuries and underwhelming performances.

JPP was interviewed after the game and credited a young cancer patient named Hayden for helping to contribute to his stellar performance. He told NBC Sports:

“We had Hayden, you know he’s fighting cancer, and I told him I was going to come out here and play for him and get a sack tonight and I wound up getting three. So this game ball goes to him.”

Pierre-Paul met the seven-year-old Hayden the previous week during his visit to the Giants practice facility that was arranged by the Garden of Dreams Foundation. During the visit, Hayden got to explore the locker room and was gifted a pair of the defensive end’s signature gloves.

We had a special guest at practice today, Hayden‼️ He perfected his touchdown dance with JPP 💯🎶 pic.twitter.com/EmnCl98QQ6

The two then took to the field where Hayden showed off his celebration dance.

After Hayden busted out his celebration, JPP promised him that he would imitate his moves if he recorded a sack on Sunday. He might have one of the worst dabs I’ve ever seen, but at least he’s a man of his word.