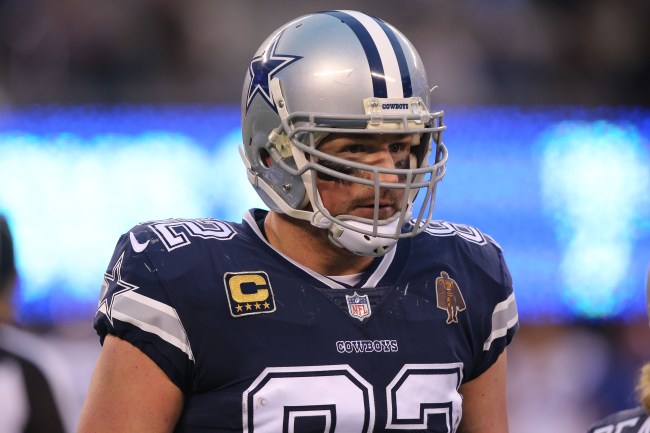 After a rough year on Monday Night Football Jason Witten is putting his broadcast career on hold to lace up his cleats for one more season.

This afternoon the Dallas Cowboys shockingly announced that Witten was going to return to the team next season.

The #Cowboys announce that TE Jason Witten has ended his retirement and is back. This is a real thing.

Jason Witten has decided to end his retirement and return to the #DallasCowboys for what will be his 16th season.

Put a stop to that Hall of Fame clock. Or better yet, just pause it for the time being.

That’s because Jason Witten has decided he isn’t done playing just yet.

Although he retired from the NFL last May, the future Hall of Famer is coming back to the Cowboys for what will be his 16th pro season. Witten played 15 years for the Cowboys from 2003-17, which included 11 Pro Bowls, the most in team history by any offensive player.

But after abruptly deciding to hang up the cleats last May and join the broadcast booth of Monday Night Football, Witten has apparently had a change of heart. He will return to the field and officially sign a contract with the Cowboys, who retained his rights when he was placed on the NFL’s Reserve/Retired list.

Apparently Witten’s desire to compete was too strong for him to ignore.

The fire inside of me to compete and play this game is just burning too strong,” Witten said in a statement. “This team has a great group of rising young stars, and I want to help them make a run at a championship. This was completely my decision, and I am very comfortable with it. I’m looking forward to getting back in the dirt.”

Of course the Internet had jokes to Witten’s departure from Monday Night Football.

Jason Witten leaving the booth and ending his retirement as a player will both improve the Cowboys AND Monday Night Football. It's a win-win!

I don’t like the Cowboys. But I have to thank them for making Monday night football better this coming season by letting Witten come back and try and play again

Jason Witten comes out of #retirement and is returning to the +@dallascowboys. #Monday #Night #Football is back to being watchable again. 👏😃🙏🏈 #NFL pic.twitter.com/DQgb6WQx9i

Jason Witten is coming out of retirement so we are saved from his play by play of Monday Night Football pic.twitter.com/SuFzUH8F7I

Along with Jason Witten the Cowboys have also signed Booger McFarland's mobile cart, saving Monday Night Football in the process.