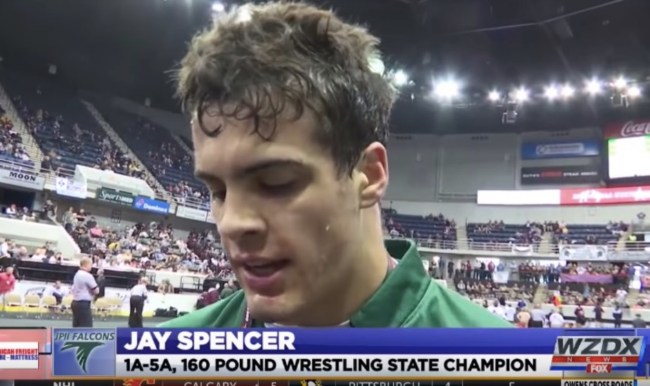 Jay Spencer has been legally blind since he was 3 years old but he doesn’t let that define him as a person. Jay made history last weekend when he became the first wrestler from St. John Paul II High School to win the state title in Alabama. After winning the state title he delivered a powerful message to anyone out there who’s had someone tell them they can’t do something.

At the age of 3, Jay was diagnosed with Leber congenital amaurosis 10 (LCA 10) and he’s been living as legally blind ever since. When wrestling, he cocks his head to the right and looks out of the corner of his left eye which is the spot where his vision is best.

Jay says of all the sports he’s tried, wrestling comes easiest to him because it’s more about feel than other sports:

“Out of all the sports I’ve tried, this is probably the least challenging to pick up because wrestling is a feel sport,” said Spencer, a senior who was the Falcons’ starting center in football the past three seasons. “I was able to pick up on that rather quickly.

“It does have some challenges, but I can ask coach, ‘Can you practice that one with me?’ or say ‘Let me work it on you and correct me if it’s wrong’; nothing that things like that can’t fix.” (via)

Jay’s coach, James Dowd, says that Jay has even managed to use his blindness as an advantage in the ring because he can’t get intimidated or distracted by the venue or crowd. He’s focused on the ‘feel’ of the match and only what takes place on the mat.

According to AL.com, Jay finished this season 35-2 with 33 wins by pin. He finished second in the regionals on Saturday but on Sunday he went on to win the Alabama State Championship in the 160-pound class. After winning, Jay gave this advice on camera:

“Don’t let what anyone thinks about you change how you think. As long as you believe you can do something, then you can.” (via)

I can’t help but wonder how Jay would do against this guy on the mat. I came across this video earlier this morning and have since watched it several times. The dude loses a contact lens, finds it, puts it back in, and still wins???

How good is .@AssumptionHS wrestler @jbiii_13? In his match against Independence, watch as he loses a contact lens, finds the lens, dusts off and picks up the lens and hands it to the referee – all while dominating the match. Broderson would win the match with a pin in at 2:18. pic.twitter.com/j1twTSanfE

Wise words from a high schooler. Coping with his blindness and becoming a state champion, he’s already overcome more adversity as a teenager than many people will face in a lifetime. I have to imagine that some big things are in store for him in the future.