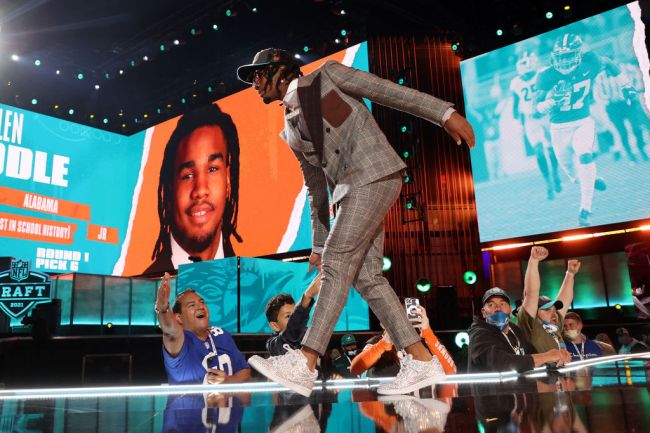 Alabama wide receiver Jaylen Waddle was selected by the Dolphins with the No. 6 overall pick in the 2021 NFL Draft on Sunday and he might be in Florida before he celebrates hearing his name called with his family. After the pick was announced, the 22-year-old got up from his seat and walked STRAIGHT out of the room and onto the stage. He didn’t hug anybody, shake anybody’s hand, nothing. He just bounced.

Although he was injured most of last year, the 5-foot-10, 183-pound receiver was drafted over his Heisman Trophy winning counterpart with the Crimson Tide. Because he was expected to be an early draft pick, as many considered him the top prospect at his position this year, he was one of a handful of players invited to attend the evening in person. Every player who was in Cleveland for the NFL Draft was placed into COVID-19 “family pods” for the day. Here is a look at Mac Jones’:

All 12 prospects at the #NFLDraft will have their own family pod backstage. Here’s a look at Mac Jones’ ⬇️ pic.twitter.com/KIhwmsAu4K

Waddle saw his SEC East foe Ja’Marr Chase go one pick in front of him before getting the call. He was halfway out of his chair as Roger Goodell announced Miami’s selection and out the door in what I have as a very unofficial 6.1 seconds after getting to his feet. In reality, draft picks get the call from their team before the pick is announced, so Waddle had plenty of time to go crazy with his family. It was a special moment for everyone involved, but once the cameras came on— it was all business.

Waddle showed some love to the other prospects in the green room before heading out to the stage. He averaged 21.1 yards per catch on 28 catches and played through a fractured ankle in the CFP National Championship game.

If Jaylen Waddle is cleared to play, DeVonta Smith (the Heisman winner) may not even be Alabama’s best wide receiver tonight. That’s scary 😳 #CFBPlayoff pic.twitter.com/d58h0ODoh2

Waddle and Tua Tagovailoa will be reunited in Florida and hope to turn the page in the Magic City.